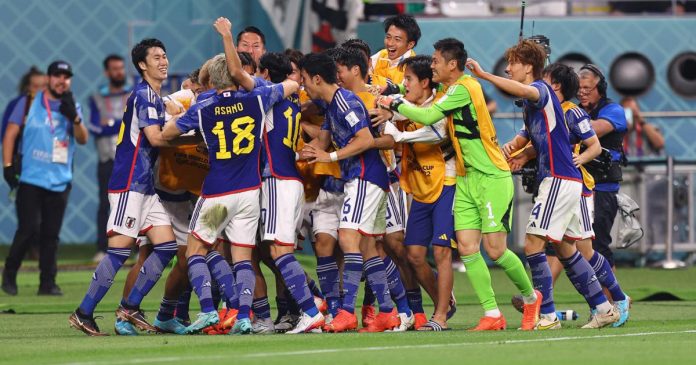 As upsets come, the shocker we saw on Day Three of the 2022 FIFA World Cup set the tone for this tournament.

Yesterday started with a huge surprise — one of the biggest in tournament history — as Saudi Arabia stunned Argentina to shock the tournament into life.

Few football fans would have heard of Saleh Al-Shehri and Salem Al-Dawsari before the match, but they stunned La Albiceleste and earned their whole country a national holiday, as they struck with a pair of goals to win it 2-1.

Poland then couldn’t find a way past Mexico in a 0-0 draw, the same scoreline we saw between Denmark and Tunisia.

In the final match of the day, injury-hit France made light work of Australia, and despite going a goal behind, Olivier Giroud bagged twice in a 4-1 win.

Will we see another shock on Day Four with the likes of Germany, Spain and Belgium all in action? Find out below, as we update the scores as they happen.

As Group’s E and F get underway, were are beginning to see more and more enticing contests in this group stage. 2018 finalists Croatia have a difficult game against Morocco, before Germany take on Asian powerhouse Japan.

Spain are heavily fancied to defeat Costa Rica, though they are a side who has surprised in the past, before Canada take part in their first World Cup game for 36 years when they play the late fixture against Kevin De Bruyne’s Belgium, who are looking to better their third-placed finish last time out.

The final groups of the 2022 World Cup finally get underway as G and H kickoff.

Switzerland and Cameroon do battle first with Uruguay and South Korea facing off not long later.

Cristiano Ronaldo will then take to the pitch as Portugal take on Ghana before world No.1 Brazil round out the day’s play against a dangerous Serbia side.

I Was There When: AI helped create a vaccine