HomeSportsWhy did Qatar even want the World Cup?
Sports

Why did Qatar even want the World Cup? 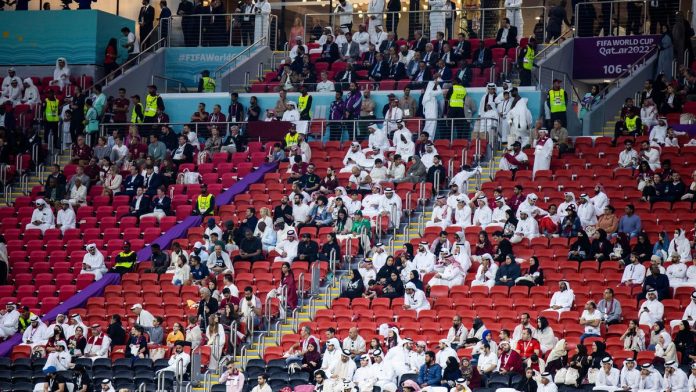 The small Middle Eastern country — known for its poor human rights record — is the World Cup host, but did Qatar actually WANT it to begin with? Whichever government officials were responsible for bringing the world’s biggest sporting event to their country must’ve wanted it enough to take the initiative, but the enthusiasm surrounding the event from the locals feels non-existent.

The host nation had never qualified for a World Cup before, but got an automatic bid for holding the World Cup inside its borders, and had its first tournament game Sunday. With 12 years of controversy and anticipation leading up to this moment, with the world watching the lone game of the tournament’s opening day, Qatar fans were leaving at halftime.

I can’t think of any other country in the world whose fans would do that. Think back to 2014 and how passionate the Brazilian fans were. Now imagine if it was Brazil’s first time ever competing at the World Cup. Do you think supporters would be leaving just because the team was losing? No, the fans would probably still be in their seats long after the janitors finished sweeping the floors. These fans stayed and watched through tears when Germany beat Seleção Canarinho 7-1 in the semi-finals. There were plenty of reasons why Brazil shouldn’t have hosted the tournament either, but it was clear that many people wanted it.

Qatar is the first country to make its World Cup debut as the host nation since Italy in 1934. Ironically, Italy was the only host nation ever required to qualify. Not only did the Italians qualify, but the Azzuri won the whole thing.

Spoiler alert: Qatar isn’t going to win this World Cup. Hell, Qatar has no business playing in this tournament.

The team’s quality and the indifference from the fans both point to the fact that everyone already knew, that this is one of the last places that should host this event. How’s that for contributing to the discourse? Just wait until you hear how I think they got it. Money may have changed hands, though Qatar has denied allegations of bribery.

Bigoted government and terrible human rights record aside, it still doesn’t make any sense. The 2026 World Cup will take place in the U.S., Canada, and Mexico, three countries that already have the infrastructure needed to host. No new stadiums are being built, and only one U.S. stadium (Arrowhead Stadium) will need to be upgraded. This should significantly cut down on the number of construction worker deaths, of which there were an estimated 6,500 in preparation for the tournament in Qatar.

To bribe your way into hosting the event, have thousands die building the stadiums, and then to almost empty those very stadiums during the game like you’re Texas A&M fans is absurdly disrespectful.

The opening ceremony featured every home video of the country’s princes playing soccer that they could find to show that they do in fact have a “soccer culture.” No one is happy the World Cup is there, and that apparently includes the people of Qatar. If the Arab nation didn’t actually want it, then it seems like it just bought it because it could.

Tottenham vs. Liverpool live score, updates and highlights as Kane pulls one back