What time is the NFL game tonight? TV schedule, channel for 49ers vs. Cardinals in Week 11 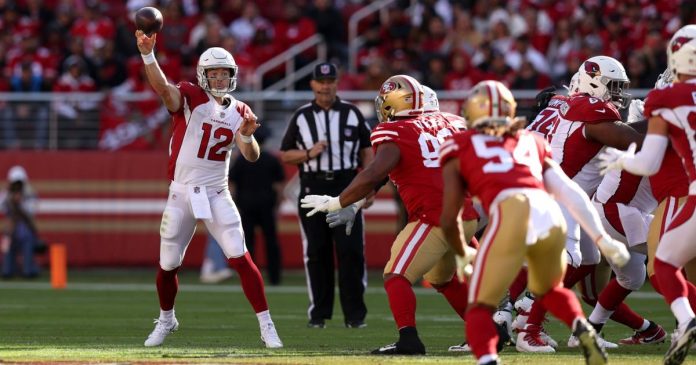 The NFC West is going international for “Monday Night Football,” as the 49ers and Cardinals play in Estadio Azteca in Mexico City.

Monday will mark the first game played in Mexico since 2019, when the Chiefs defeated the Chargers 24-17. It’s the fourth NFL game south of the border . All four games have been played in Estadio Azteca, the largest stadium in the country.

The 49ers are looking to build on last week’s primetime victory over the Chargers, a 22-16 knock-em-down-drag-em-out style win. The Cardinals, meanwhile, are coming off a 27-17 win over the Rams minus Kyler Murray.

The Cardinals are coming into this game riddled with injuries, with Kyler Murray dealing with a tweaked hamstring, Zach Ertz out for the season, and some pieces of their offensive line dealing with injuries as well. The 49ers are healthier, but not quite healthy. Jimmy Garoppolo is still heading the offense with Trey Lance out for the season, and they haven’t had much explosiveness in their offense this year, even with the addition of Christian McCaffrey.

The 49ers enter this matchup 5-4 whereas the Cardinals are 4-6 — both disappointing records for these squads. This game could well be a fulcrum point for the winner, as they look to catch the shocking Seahawks in the NFC West.

Here’s what you need to know about the 49ers’ Monday night clash against the Cardinals, including start time and broadcast information.

What time is the NFL game tonight?

The 49ers-Cardinals game will kick off at 8:15 p.m. ET from Estadio Azteca in Mexico City.

What channel is ‘Monday Night Football’ on tonight?

“Monday Night Football” will be broadcast nationally on ESPN. Pregame coverage will begin at 6 p.m. ET with “Monday Night Countdown.”

Joe Buck will handle play-by-play duties, while Troy Aikman will serve as the game’s color commentator. Lisa Salters will provide reports and interviews from the sideline.

There will be no “Monday Night Football with Peyton and Eli” alternate broadcast on ESPN2. Peyton and Eli Manning will return in Week 13.

Viewers with cable can stream the game through the ESPN App or ESPN.com. Cord-cutters can watch on ESPN+ with a subscription to the service, or via fuboTV, which offers a free trial.

Canadian viewers can find Monday night’s game on TSN 1/3/4 (English-language) or RDS 2 (French-language), and via DAZN, which carries every NFL game.

49ers vs. Cardinals will be broadcast nationally on ESPN. Fans with a cable subscription can stream the game via ESPN.com or the ESPN App.

But cord-cutters have multiple options to watch the game, too, They can watch with a subscription to the ESPN+ streaming service, and via fuboTV — which carries the ESPN family of networks and comes with a free trial. Streamers in Canada can watch via DAZN, which features every NFL game.

Here are all the ways cord-cutters can stream the game on Monday night: