HomeSportsWhat channel is Chiefs vs. Bengals on today? Time, TV schedule for...
Sports

What channel is Chiefs vs. Bengals on today? Time, TV schedule for NFL Week 13 game 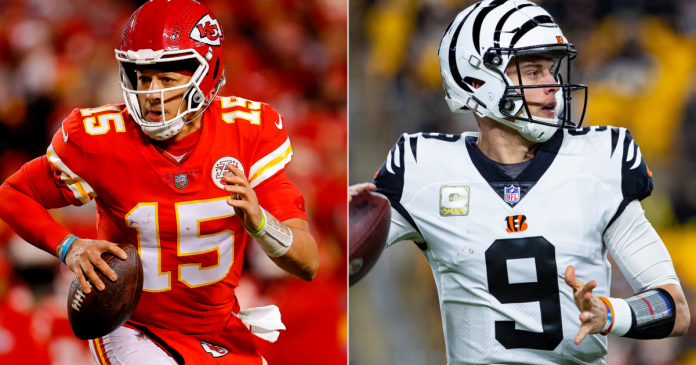 Is Bengals-Chiefs the NFL’s next great rivalry?

Joe Burrow has gotten the best of Patrick Mahomes the last two times they’ve met, including a wild comeback win in the AFC Championship Game last season. Sunday will give Mahomes a chance to avenge defeat and continue his chase for a second MVP award.

IYER: Why Patrick Mahomes’ 2022 stats end all ‘Best QB in the NFL’ debates

While the Chiefs have the AFC’s best record at 9-2, the Bengals seem to be playing their best football of the season and are getting star receiver Ja’Marr Chase back for this much-anticipated matchup.

Burrow and the passing game carved up Kansas City’s defense when these teams met in the regular season last year, but it was the defense that sent Cincinnati into the Super Bowl, stunningly shutting down Mahomes for much of the second half and overtime in January.

With Tyreek Hill out of the picture this time, Mahomes will be looking to spread the ball around and throw the Bengals’ defense off its game.

MORE: Is Joe Burrow-Patrick Mahomes the new Brady-Manning? One Bengals receiver says so

A loss to the Bengals would threaten to knock the Chiefs out of the top seed in the AFC, but Kansas City is in great position to win the AFC West.

The Bengals, on the other hand, are fighting to pull ahead of the Ravens in the AFC North. A win over the almighty Chiefs could be the same confidence-booster it was for Cincinnati in the weeks before last season’s playoffs.

Here’s everything you need to know to watch Chiefs vs. Bengals on Sunday, including kickoff time, TV channels and full 2022 schedules for both teams.

What channel is Chiefs vs. Bengals on today?

Chiefs vs. Bengals will be broadcast regionally on local CBS affiliate stations. CBS’ top broadcast team, Jim Nantz (play-by-play) and Tony Romo (color analyst) will be on the call from Cincinnati.

Viewers in the United States can stream Chiefs vs. Bengals on fuboTV, which offers a free trial.

Canadian viewers can stream the game on DAZN, which carries every NFL game.

Chiefs vs. Bengals from Paycor Stadium in Cincinnati is set to start at 4:25 p.m. ET on Sunday, Dec. 4.

cybersecurity’s next act, and mass protests in China

Germany’s top energy regulator said the country can last just 2.5 months without Russian gas, and there will be a ‘difficult’ autumn and...