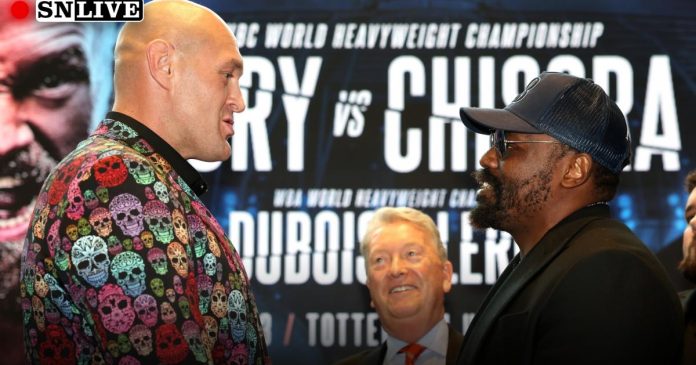 The WBC heavyweight title is on the line at Tottenham Hotspur Stadium in London.

Fury is 2-0 against Chisora. He is also the heavy favourite, as Caesars has him as the -2000 favourite.

Despite a long-standing friendship with Chisora, The Gypsy King believes this will be anything but a jovial affair.

“You’re going to see Del Boy get knocked sparked out. I’m not playing games, this is not fun and games for me, this is strictly business,” Fury told Yahoo Sports.

The Sporting News will provide live coverage and highlights from Fury vs. Chisora 3 below.

MORE: Sign up to watch Tyson Fury vs. Derek Chisora 3 on ESPN+

7:20 p.m. GMT/2:20 p.m. ET: Berinchyk was accompanied into the ring by a couple of guys wearing Ukrainian military fatigues. Mendy entered to Still D.R.E. ahead of his 54th professional contest. He’ll need to bring all his experience to bear tonight against the supremely skilled Berinchyk, who is unbeaten as a pro but now 34 and needing to make a move towards world honours sharpish if he’s to do so at all.

7:10 p.m. GMT/2:10 p.m. ET: The champ is here! Fury arrives with his WBC belt slung over his shoulder like a shotgun. There’s a warm reception as he appears on the stadium screens. Next up, we have what could be a cracking contest for the Europoean lightweight title. Veteran Frenchman Yvan Mendy, one-time conqueror of Luke Campbell, is still plugging away and defending the vacant title he won against Italy’s Gianluca Ceglia last time out. In the other corner is Denys Berinchyk, a silver medalist at the London 2012 Olympics and a member of that obscenely talented Ukraine squad. His old teammate Usyk is here to cheer him on, of course.

7:00 p.m. GMT/2:00 p.m. ET: Itauma does get the stoppage. Again he varied his attacks nicely to head and body, with Belujsky struggling to escape. A left upstairs sagged the visitor and the referee had seen enough.

Karol Itauma wasn’t letting this one go to the judge’s scorecards! Gets the finish in the final round! 👏#FuryChisora | Main Event at 9PM | BT Sport Box Office pic.twitter.com/qrvMXy21rf

6:55 p.m. GMT/1:55 p.m. ET: Itauma is offering a nice demonstration of his skills here and, in round seven, Belujsky is down under a flurry of shots in centre ring. He manages to ride out the storm to the bell but this is going to be a wide points win for Itauma, even if he is unable to secure a fifth consecutive KO victory.

6:35 p.m. GMT/1:35 p.m. ET: 8-0 English light-heavyweight prospect Karol Itauma is a couple of rounds into his work against Irish-based Slovakian Vladimir Belujsky. There are a few big names lurking around tonight, all names potentially in Tyson Fury’s immediate future. Joe Joyce is here at ringside, while Oleksandr Usyk is lurking around Tottenham.

6:15 p.m. GMT/1:15 p.m. ET: Well, that certainly keeps us on track for Chisora and Fury’s ringwalks. Nicaragua’s Cruz Perez leant forward cumbersomely, retreated in similarly rudimentary fashion and Barney-Smith tagged him with a peach of a left hand. The visitor got to his feet but was on unsteady legs and the contest was waved off. Barney-Smith moves on to 4-0 and, with back-to-back first-round stoppages to his name, he might hope for some more substantive work in 2023. On the other hand, he is only 18 so there’s no particular rush.

6:00 p.m. GMT/1:00 p.m. ET: Similarly easy work for Burton against a late replacement. The Fury clan go two for two. Next up we have exciting super-feather prospect Royston Barney-Smith, who also boxed on the Fury vs Whyte undercard at Wembley.

5:40 p.m. GMT/12:40 p.m. ET: There’s a pleasingly quick turnaround as we chase a 9 p.m. ringwalk time for Fury vs Chisora. Another of the heavyweight champion’s cousins, Hosea Burton, is in the ring now in light-heavyeweight action. I promise there are bouts tonight without members of the extended Fury clan involved!

5:35 p.m. GMT/12:35 p.m. ET: A straightforward outing for Lowe, which was just what the doctor ordered after his recent punishing setbacks. He won every round against an opponent who was kind enough to stand in front of him and get punched and the referee duly scored the bout 60-54, moving Lowe onto a 22-2-3 professional record.

5:23 p.m. GMT/12:23 p.m. ET: We’re halfway through our first preliminary bout of the evening, featuring Fury’s cousin Isaac Lowe. You may remember him as being briefly announced as Fury’s trainer when the Gypsy King ended his retirement in the summer and then retired again. For this actual comeback, Sugar Hill Steward is in the WBC heavyweight champion’s corner and super-featherweight Lowe is negotiating a six-rounder against Sandeep Singh Bhatti after back-to-back defeats against Luis Alberto Lopez and Nick Ball.

5:15 p.m. GMT/12:15 p.m. ET: Fittingly, given we’re into Christmas party season, the object of the exercise tonight for Fury is to avoid embarrassing himself unduly and depart with his dignity intact. Even with the usual caveats of one punch being able to change everything in heavyweight boxing, it is hard to give the all-action and popular Chisora much of a chance.  Given fights with Oleksandr Usyk and Anthony Joshua were mooted beforehand, Fury’s self-proclaimed “people’s champion” has taken bit of a hit. However, if he takes care of business tonight and then goes on to those blockbuster assignments in 2023 then no one will mind too much.

5:00 p.m. GMT/12:00 p.m. ET: Hello and welcome to The Sporting News’ live coverage of Tyson Fury vs. Derek Chisora 3. The third instalment of what has been a one-sided rivalry to date comes eight years after the second, when Fury won in 10 rounds. The WBC heavyweight title will be on the line.

When is Tyson Fury vs. Derek Chisora 3?

How to watch Tyson Fury vs. Derek Chisora 3

In The U.K., the Fury vs. Chisora fight will air on BT Sport Box Office via PPV.

In The U.S. the event will air on ESPN+. It will also air on Main Event on Kayo in Australia.

MORE: Sign up to watch Tyson Fury vs. Derek Chisora 3 on ESPN+

Tyson Fury vs. Derek Chisora 3 price: How much does the card cost?

The price has been confirmed as £26.95 for BT Sport Box Office.

In the U.S., you will need to pay $9.99 a month for a monthly subscription to ESPN+ or an annual subscription for $99.99/yr. The Fury vs. Chisora fight won’t be an additional cost to current ESPN+ subscribers.

Immunity to COVID in Britain is waning as winter looms, testing expert warns, and there’s no plan for a booster program in sight