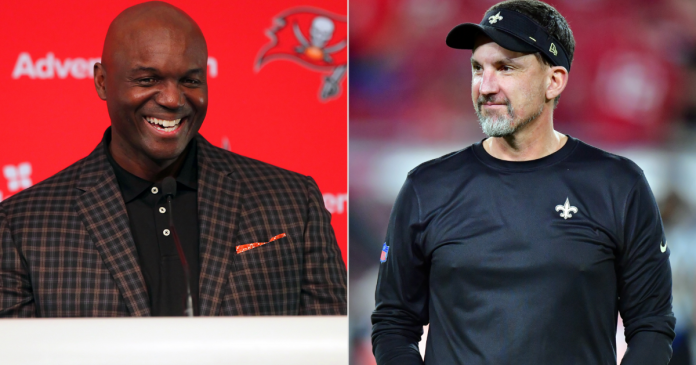 “Monday Night Football” took about 50 minutes of game time to heat up, and when it did, neither Buccaneers coach Todd Bowles and nor Saints coach Dennis Allen seemed to respond well to the pressure.

The Buccaneers eked out a 17-16 victory behind late-game heroics from, who else, Tom Brady. They scored with three seconds on the clock, but the road to get there was long and meandering.

Both Bowles and Allen made baffling decisions down the stretch. They also showed that clock management is an acquired skill.

With that in mind, here’s a look at the worst decisions they made in the fourth quarter alone.

Tampa Bay’s offense has been stagnant all night, but late in the third quarter it started to move a bit. The Bucs got to the Saints’ 40 line and faced with fourth-and-7 while trailing 13-3.

On the first play of the fourth quarter, Tampa Bay punted. The result was a touchback, a 20-yard net punt.

The punt was graded harshly online.

On their next possession, the Buccaneers were down 16-3 after a nearly seven-minute drive by the Saints. They went three-and-out, punting again with seven minutes to play. The ball was now in Allen’s court.

The Saints pass on third-and-1 against Carlton Davis

After receiving the punt, the Saints ran once before throwing a swing pass to running back Mark Ingram that ended with Ingram going out of bounds short of the first-down marker.

MORE: Allen explains why Ingram stepped out of bounds

On third-and-1 from the Bucs’ 44, Allen made the confusing decision to pass, a quick-hitting slant to Marquez Callaway that was broken up by cornerback Carlton Davis on an outstanding play.

The incompletion stopped the clock. Rather than go for it on fourth down with a 13-point lead, the Saints punted. The Bucs got the ball at their 9 with 5:21 to go.

The reason the Saints have been able to largely contain Tom Brady since he joined the Buccaneers is they play him aggressively and frustrate him.

They did that again for three quarters Monday, but for whatever reason, they stopped briefly after their punt. The Saints allowed Brady to engineer a 10-play, 91-yard touchdown drive that was a clinic in taking what the defense gave him. The Saints were playing over the top for much of the drive, so the Buccaneers were running quick routes to the sideline to move the ball.

Brady found holes in the New Orleans zone and was able to pick it apart, and the Saints seemed to let him. The touchdown, a 1-yard pass to tight end Cade Otton, made it a one-possession game with three minutes remaining. The Buccaneers also had all three of their timeouts.

The Saints’ final drive was puzzling

It’s difficult to overstate how bad the Saints’ final sequence of plays was.

On first down, they ran into the teeth of a seven-man box with Alvin Kamara and picked up 3 yards. On second down, they ran a play that was too cute by half. They took their receivers off the field, hoping to get the Buccaneers to sell out for the run. The call was a play-action pass, but no one was open on the initial route. The result was a coverage sack and a loss of 10.

On third down, the Saints passed again, with Taysom Hill — not a wide receiver by trade — dropping a seam pass. That stopped the clock yet again, leaving the Buccaneers nothing but time.

Allen made a classic coaching mistake here. The Buccaneers quickly got into scoring position after starting from their 37 with 2:29 to play.

After the two-minute warning, the Buccaneers ran plays with 24, 29 and 18 seconds between them before the Saints called a timeout with 19 seconds left.

It looked as if the Saints might escape with the win after a holding penalty erased a Chris Godwin touchdown reception, but the Buccaneers went on to score with three seconds left, all but eliminating any chance of a New Orleans comeback.

While some of these calls get better and some get worse with the benefit of hindsight, they aren’t good in a vacuum. But it doesn’t take hindsight to see the Saints came out on the worse end.

It would be hard to argue against this being Allen’s worst loss of the season as the Saints dropped to 4-9 going into their bye week and likely lost a chance to make a run at the division title.

Although Bowles is hardly free from criticism, his decision to trust his defense paid off. But those punts highlighted the lack of urgency that the Buccaneers have shown at times this season. It will be interesting to see how they adapt against teams that will make them pay for their mistakes.

How to watch Champions League in USA: TV channels, free live streams for all matches in 2022/23