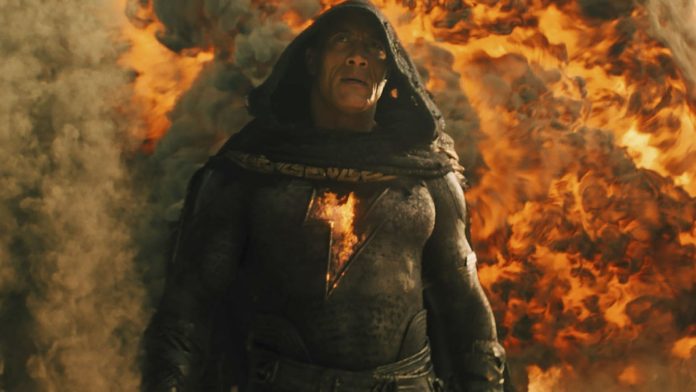 Not even Dwayne “The Rock” Johnson could salvage Warner Bros.’ latest entrant into the DC Extended Universe.

“Black Adam,” which premieres Friday, did not impress critics, generating a meager 53% on Rotten Tomatoes from 102 reviews as of Thursday afternoon. While expectations are that the film can pull between $55 million and $75 million during its opening weekend, poor word of mouth could dash the reportedly $200 million film’s hopes before it has a chance to take off.

The film centers on Black Adam, a man who was bestowed the almighty power of the gods, but uses those gifts for vengeance. He is imprisoned for nearly 5,000 years and emerges in modern times to dole out his own unique form of justice.

Unlike his traditional superhero counterparts — in this film it’s the Justice Society, not the Justice League — Black Adam is not averse to the use of deadly force.

Here’s what critics had to say about “Black Adam” ahead of its theatrical debut:

“Watching an action movie shouldn’t feel like a chore, but ‘Black Adam’ does,” wrote Kristy Puchko in her review of the film for Mashable. “Amid a slew of publicly damned decisions, Warner Bros. has released a DC Extended Universe movie that is more exhausting than exciting, spooling out tedious exposition alongside ugly action for a muddled mess of a movie that squanders its big budget and the promising star power of Dwayne Johnson, Aldis Hodge, and Noah Centineo.”

Puchko noted that “Black Adam” rushes through the introductions of Cyclone, Atom Smasher, Hawkman and Doctor Fate “so quickly that it’s actually comical.”

“In their rush to ‘meet the team,’ the screenwriters ramble out more hasty exposition that’s difficult to grasp amid the cross-cutting of so many introductions and quirky cameos (which I’ll admit are a thrill),” she said. “‘Black Adam’ is in such a hurry to pitch this batch of C-list heroes into their battle with the protagonist, that your head might be spinning.”

Read the full review from Mashable.

“‘Black Adam’ isn’t bad,” said Mark Kennedy in his review of the film for the Associated Press. “It’s just predictable and color-by-numbers, stealing from other films like an intellectual property super-villain.”

Kennedy noted that Johnson is a natural choice to play Black Adam, able to mix “might with humor,” but ultimately his performance and the overall film were “let down by a derivative and baggy screenplay.”

“[The film] goes from one violent scene to another like a video game in order to paper over a plot both undercooked and overcooked,” he said. “At one point, with the audience exhausted by all the carnage, they introduce skeletons who rise up as a legion from hell, just what we wanted.”

Read the full review from the Associated Press.

For Alonso Duralde of The Wrap “Black Adam” felt like “both too much and not enough,” a film where the “narrative gambits are helped by a sludgy visual style that’s either distractingly artificial or dispiritingly gloomy, except when it manages to be both.”

“The ensemble does what it can with the material, but no one’s going to be including this in their eventual life-achievement reels,” he said. “There’s a jarring sense of four-quadrant casting at work here — Brosnan for the parents! Centineo for the teens! Skateboard kid for the tweens! — that reads too obviously as a marketing strategy and not as a cast of characters who would actually be interacting in these circumstances.”

Like many other critics, Duralde said the film tries to make a correlation between the Justice Society’s sudden appearance in Kahndaq, a fictional country in the Middle East, and past U.S. imperialism, it stops short of making any meaningful statement.

Read the full review from The Wrap.

Critics also narrowed in on the narrative choices of “Black Adam.” The superhero film tries to brand its titular character as a vengeful, dark anti-hero, but does nothing story-wise to elevate or redefine the genre.

“‘Black Adam’ so desperately wants to be a darker and gristlier version of the same hamburger that audiences have been served over and over again for the last 15 years, but Johnson — who’s also a producer on the film, and a part-time architect of this cinematic universe in addition to our own — can’t abide the idea of doing something that might leave even one audience member behind,” said David Ehrlich in his review of the film.

He called “Black Adam” “exhaustingly derivative,” noting that the film felt like it had been “audience-tested within an inch of its life.”

Not even the main antagonist of the film could inspire critics.

“They team up to fight what might be the single most forgettable villain in comic book movie history, which is a wild thing to say about a giant hell demon with a pentagram scar across its entire chest,” Ehrlich wrote.

Read the full review from IndieWire.

Johnson has been connected to the Black Adam character at least 15 years, explained Matt Singer in his review of the film for ScreenCrush. The project has won and lost directors and writers for years, but the former WWE wrestler has always been attached.

“Alas, 15 years of work produced a pretty middling movie, one that does not seem to reflect what must have been hundreds of hours of writing and countless screenplay drafts,” he said.

“Instead, Black Adam plays like a committee-made product designed to zhoosh up the stagnant DC Extended Universe with a massive star and a batch of new heroes to spin off into future movies,” Singer said. “After two hours of dour table setting, you’re left with a clear direction for DC’s cinematic future — and a lot less interest in actually watching it.”

Read the full review from ScreenCrush.

Michelle Pfeiffer’s Blunt Bob Haircut Might Inspire Your Next Chop

Regenerative Farming Is More Important Now Than Ever Before

Get clients by being your authentic self: How one coach does it