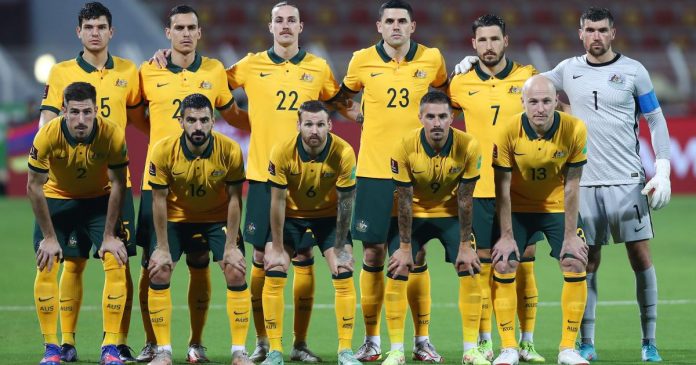 After a long qualifying campaign that went down to a penalty shootout, the Socceroos are playing at the 2022 World Cup in Qatar.

While the team may have qualified, few players really stood out in a squad that stumbled through qualifying, and many of them have been under injury clouds coming into the tournament.

Coach Graham Arnold has made a point to give younger players opportunities in recent years and the side will be a mix of youth and experience in Qatar.

Unlike in previous World Cups, the Socceroos were able to name a 26-man squad for the 2022 tournament in Qatar. Which players made the cut to carry Australia to potentially an unlikely run to the knockout rounds?

Arnold was permitted to name an official preliminary list of 35-55 players up until Friday, October 21 with FIFA confirming final squads needed to be submitted by no later than November 14.

The Socceroos didn’t play any friendlies before the World Cup, so squad selection came down to recent club form and performances during qualifying.

Teenage sensation Garang Kuol has made the cut with the young attacker set to join Newcastle United in January.

Marco Tilio has joined the team in Doha after Martin Boyle was ruled out with an injury.

Many Journeys. One Jersey. One Squad.

Ready to #GiveIt100 on the world stage once again. pic.twitter.com/a0ITlQqdoM

Hibernian attacker Martin Boyle was given extra time to prove his fitness following a knee problem, but the 29-year-old was forced to pull out at the last minute, with Marco Tilio replacing him.

Centre-backs Harry Souttar and Kye Rowles have both overcome injuries just in time for the World Cup.

Some feeling to be back on the pitch ⚽️🔴 https://t.co/T5yAcvSS59

Australia have had a mixed 2022 to date but did just enough to book their place at a fifth straight World Cup.

The Socceroos have failed to escape their group since 2006 and will be hoping this is the year they can progress further.

Scotland-based Aaron Mooy is the most consistent performer in this Australia team.

Playmaker Ajdin Hrustic has also shown glimpses of his star potential and is currently playing in Serie A with Hellas Verona – his ability to create will be key to igniting the Socceroos attack. A recent injury has, however, cast some doubt over whether he will be able to play at the World Cup.

Teenager Garang Kuol is a rising star and will join Newcastle United in January after starring at club level in Australia.

Australia have been blessed with some serious talent in midfield over the past decade with no shortage of quality in this area of the park.

Defensively, the Socceroos are also seeing a talented bunch of youngsters step up with Harry Souttar and Kye Rowles looming as real assets at the back for years to come.

Arguably since Tim Cahill, no player has been able to step up regularly in the final third for Australia. In fact, the team will head to Qatar with the starting striker spot still up in the air.

While the Socceroos scored for fun in the early stages of World Cup qualifying, they struggled to break down stronger opposition, failing to score against Japan and Saudi Arabia in 2022.

MORE: Get Straight Up Screamers this FIFA World Cup with Great Promos, Great Odds and Same Game Multi at Palmerbet

Just like the squad, Australia’s starting side for the 2022 World Cup is still very much a calculated guess at this stage.

In the Socceroos’ two playoff matches, they deployed a 4-1-4-1 formation but prior to that were using a 4-3-3 variation with two of their midfielders sitting deeper.

For the World Cup, Arnold may opt for a more defensive formation with group games against France, Denmark and Tunisia set to test their backline.

Once the final 26-man roster is official, participating teams at the World Cup can only make changes before the first game of the tournament, and only in the case of extraordinary circumstances.

According to the official tournament rules, “a player listed on the final list may only be replaced in the event of serious injury or illness up until 24 hours before the start of his team’s first match.”

The team in question would need to submit a medical report to FIFA and if the world governing body determines “the injury or illness is sufficiently serious to prevent the player from taking part in the FIFA World Cup” then the replacement will be allowed.

The replacement player must come from the preliminary list of players submitted to FIFA in October.

Should the Detroit Lions play on Thanksgiving? | Nate Burleson

Twitter Reportedly Plans to Charge $20 a Month for Verified Accounts