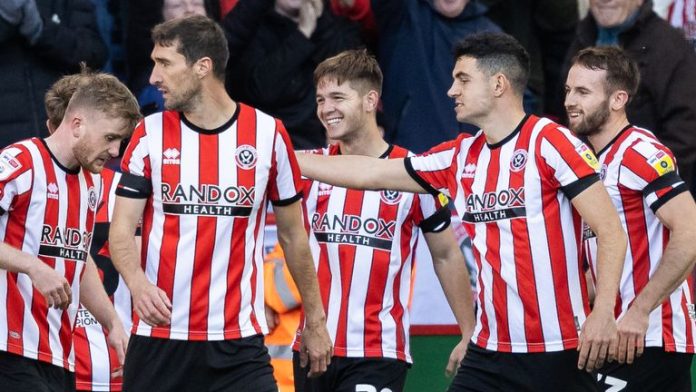 Oliver Norwood scored a 98th-minute equaliser as Sheffield United drew with Blackpool in a six-goal thriller with four red cards and a late missed penalty.

The hosts had looked comfortable following goals from James McAtee and Iliman Ndiaye, but Jerry Yates struck twice to make it all square at the break and Kenny Dougall made it 3-2 to Blackpool early in the second half.

Blackpool were reduced to nine men in the closing stages after having Marvin Ekpiteta and Dominic Thompson sent off and Norwood equalised deep into time added on.

A scuffle after the final whistle involving a number of players resulted in Sheffield United goalkeeper Wes Foderingham and Blackpool’s Caolan Lavery both receiving red cards.

The home side, who began the day as Sky Bet Championship leaders, took the lead after just eight minutes when Tommy Doyle’s cross was headed back by Billy Sharp at the far post and McAtee controlled the ball before slipping it past goalkeeper Chris Maxwell.

Blackpool’s Gary Madine volleyed over and Yates had an effort deflected off target.

It was 2-0 when Norwood’s low cross was blocked by Maxwell at his near post and the ball looped up into the air, allowing Ndiaye (24) to head in from close range.

Blackpool pulled a goal back on the half-hour mark. The home defence failed to clear following a corner and Dougall’s cross was met by Yates, who headed into the roof of the net.

A superb save from Maxwell prevented Doyle from restoring United’s two-goal lead. Following Ndiaye’s persistence, which saw the ball kept in play, Ben Osborn’s cross was headed back by George Baldock into the area and Doyle’s firm drive was turned over by Maxwell.

Yates (42) scored his second of the afternoon to level the scores, meeting Shayne Lavery’s cross with a cushioned volley.

Blackpool’s comeback was complete when John Egan, attempting to intercept a pass from Charlie Patino, succeeded only in diverting the ball into the path of Dougall (50) who raced through the middle and slotted past Wes Foderingham.

Blackpool threatened to increase their lead with Patino firing wide from the left-hand side of the area after the United defence left Foderingham exposed.

Ekpiteta was sent off in the 79th minute after receiving a second booking and he was followed two minutes later by team-mate Thompson, who was also shown two yellow cards.

United were awarded an 88th minute penalty after a foul on Ahmedhodzic. Brewster stepped up and saw his penalty come back off Maxwell’s left-hand post.

Deep into stoppage time, following a corner, Norwood’s volley saw the ball find its way through a packed penalty area to make it 3-3.

Then a melee after the final whistle resulted in Foderingham and Lavery both receiving red cards.