HomeBusinessRishi Sunak stands to rescue Britain from the ‘guaranteed disaster’ of a...
Business 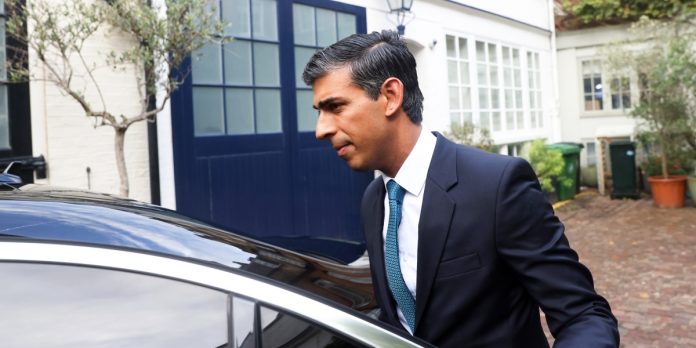 Rishi Sunak gained momentum in the race to become UK prime minister, securing the public backing of senior Conservative Party lawmakers ahead of an initial leadership vote on Monday and putting pressure on Boris Johnson to declare his hand.

The former chancellor announced on Sunday he was running for the party leadership in a contest sparked by the resignation of Liz Truss after a turmoil-filled 44 days as premier. “I want to fix our economy, unite our party and deliver for our country,” he said in a Twitter post.

Johnson meanwhile is yet to publicly announce his candidacy, even as a person familiar with the discussions said the former prime minister had already secured the support of 100 lawmakers, enough to put him on the ballot on Monday. But his public endorsements were only about half that, and throughout Sunday it was clear that the big Tory names increasingly were backing Sunak.

Suella Braverman, whose resignation as home secretary last week helped to trigger the contest to replace Truss as party chief and prime minister, endorsed Sunak. “We, as a party, need to change,” she wrote in the Telegraph. “We need to provide leadership, stability and confidence to the British people.”

Whoever wins will face the task of trying to bring unity to a party that has been through months of upheaval and bruising public infighting. Truss took office following a leadership battle with Sunak that descended at times into public slanging matches, and which was sparked in turn by the departure of Johnson as premier after a series of scandals. It comes as economic challenges mount with inflation at four-decade highs and a widening cost-of-living crisis as people face rising energy bills.

Sunak has at least 123 lawmakers behind him, compared to Boris Johnson’s 51 named backers, according to Bloomberg’s tally. The only other candidate for now is leader of the Commons, Penny Mordaunt. She has 23 confirmed backers in Bloomberg’s tally but told Sky News she was “confident of our numbers.” She confirmed she would keep the current chancellor, Jeremy Hunt, in his role and that she had sat down with him in the Treasury and been briefed on the state of the country’s finances.

Investors are likely to sell the pound and gilts in the event of a Johnson or Mordaunt victory, while a Sunak win would probably support UK assets for a while because he is seen as having a better understanding of what the country needs to balance the books. The race will conclude either by Monday evening or, if put to an online vote with the wider Tory party membership, by Friday.

Johnson and Sunak met last night amid speculation of a deal between the two, despite the bitterness left by Sunak’s role in Johnson’s downfall as prime minister. There was no apparent outcome from those discussions and no mention of Johnson in Sunak’s announcement. Mordaunt meanwhile rejected a proposal from Johnson to quit the race and back him instead, the Telegraph reported, without saying where it got the information.

Johnson did garner some supporters on Sunday, including Foreign Secretary James Cleverly and Nadhim Zahawi, a short-lived chancellor for Johnson.

“He got the big calls right, whether it was ordering more vaccines ahead of more waves of Covid, arming Ukraine early against the advice of some, or stepping down for the sake of unity. But now, Britain needs him back,” Zahawi wrote on Twitter.

But Steve Baker, a Northern Ireland minister and leading Brexiteer who backed Johnson in the 2019 general election, said another Johnson premiership would be a “guaranteed disaster.” Baker told Sky News the country needed “stability and professionalism” and Johnson would be distracted by an ethics inquiry into issues including parties during coronavirus lockdowns.

—With assistance by Alex Wickham and Ryan Hesketh

Sign up for the Fortune Features email list so you don’t miss our biggest features, exclusive interviews, and investigations.

A Slack Bug Exposed Some Users’ Hashed Passwords for 5 Years