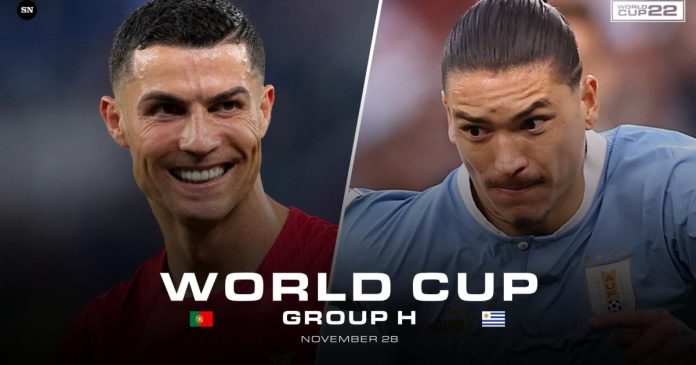 Portugal can officially qualify for the Round of 16 if they can defeat Uruguay in a matchup of Group H favorites.

Fernando Santos’ side held on to defeat Ghana 3-2 in one of the more entertaining group openers, and another three points would see them through to the next round and in pole position to win the group.

Meanwhile, Uruguay were held to a dour 0-0 draw against South Korea and will be desperate to jumpstart their attack led by Liverpool striker Darwin Nunez, and former Anfield star Luis Suarez. But the forward duo didn’t get much in the way of service against South Korea.

Portugal have plenty of attacking flair and showed it off against Ghana, with Cristiano Ronaldo becoming the first player to score in five World Cup tournaments. They’ll be challenged by Uruguay’s stingy defenders but would love nothing more than to dish out some payback for the Round of 16 elimination suffered at the hands of La Celeste four years ago.

Sporting News is tracking live scoring updates and highlights for Portugal vs Uruguay at the 2022 World Cup. Follow below for complete results from the Group H match in Qatar.

11 mins: A first chance for Darwin Nunez to stretch his legs, three defenders occupied by the Liverpool forward, who wins a corner down the left. Jose Maria Gimenez rises highest to meet it, but the ball loops on to the top of the net.

7 mins: Nice crossfield ball from Nuno Mendes finds Ronaldo on the right, and an impeccable climb brings a knockdown for Bruno Fernandes, who drags a shot wide from 25m.

6 mins: Uruguay concede three free-kicks in just over a minute, the last, for a Rodrigo Bentacur foul on Ruben Dias, bringing an early yellow card.

3 mins: Mathías Olivera with the first sight of goal, the Uruguay wing-back playing the ball into Edinson Cavani and accepting the return pass only to lash over from the edge of the area.

4 mins: Still got it! Ronaldo produces a remarkable layoff with his shoulder to William Carvalho just inside the penalty area, but the Portugal midfielder cannot keep his volley down.

Ronaldo with the shoulder pass to set up Portugal’s best chance of the first half so far 🎯 pic.twitter.com/SMpJMZh5eU

KICKOFF: Darwin Nunez gets us off and running, and Uruguay will have the ball to start with.

3 mins to kickoff: What a setting for this one!

Back at Lusail Stadium! Messi scored here for Argentina 48 hours ago vs Mexico…. Tonight, Ronaldo and Portugal take on Uruguay. FOX now pic.twitter.com/vTGBOn5XN3

5 mins to kickoff: The teams emerge on to the pitch, and it’s time for the last of the pre-match formalities.

10 mins to kickoff: Something has to give tonight. While Portugal have lost only one of their last 13 group games at the World Cup (W7 D5), Uruguay have kept five successive clean sheets in the group stage; no one has ever managed six in a row.

A worrying omen for Portugal, who have won just one of their last nine meetings with South American nations in all competitions (D3 L5), beating Argentina 1-0 in a friendly in November 2014.

15 mins to kickoff: All eyes on Portugal’s main man as ever.

Ronaldo receives a loud ovation from Portugal fans as he runs on the field 🇵🇹 pic.twitter.com/VPOples7af

20 mins to kickoff: Portugal’s sole win against Uruguay is a 3-0 friendly success in a warmup for the 1966 World Cup, Jose Augusto Torres hitting a hattrick in Basel.

25 mins to kickoff: The Uruguay warmup is in full swing:

30 mins: This is only the third meeting between the sides, their 2-18 last=16 tie their first fixture since 1972. Uruguay came out on top four years ago, Edinson Cavani’s double either side of a Pepe equaliser taking them into the quarter-finals.

35 mins: Portugal fans settling into Lusail Stadium and making themselves at home:

45 mins from kickoff: You might say there’s a relaxed mood among the Uruguay squad!

50 mins from kickoff: Three changes apiece tonight, with Pepe and Nuno Mendes starting in defence for Portugal and William Carvalho coming into midfield.

Sebastian Coates comes into the Uruguay defence, which is now a back three, while Edinson Cavani starts up front in preference to Luis Suarez.

1 hr from kickoff: Team news is IN!

1 hr 15 mins from kickoff: With kickoff fast approaching, we’re not far away from getting that all-important team news…

1 hr 30 mins from kickoff: Always enjoyable to see inside the dressing rooms, and Portugal’s is looking pretty fine!

1 hr 45 mins from kickoff: Brazil and Switzerland are playing in the earlier match and you can catch up with the latest updates and highlights from that one here.

We’re back for the second half of 🇧🇷🆚🇨🇭!#FIFAWorldCup | #Qatar2022

2 hrs 15 mins from kickoff: If you want to watch the action from tonight’s game, take a look at our detailed guide on how to tune in across some of the major territories around the world.

2 hrs 45 mins from kickoff: Ghana players and fans have been celebrating that huge win over South Korea. They face Uruguay in their final group game and, depending on the South Americans’ result against Portugal later, the Black Stars may not even need a victory to guarantee their place in the last 16.

Next up for the @GhanaBlackstars?

3 hrs 15 mins from kickoff: Beyond what he can do at this World Cup, the attention around Cristiano Ronaldo is intense given we don’t know which team he is going to join next after his Manchester United contract was terminated. You can read up on some of the latest speculation here, including the details of a huge offer from Al Nassr.

3 hrs 45 mins from kickoff: The other match in this group was an absolute thriller today, with Ghana letting a two-goal lead slip against South Korea but going on to get three priceless points. You can read all about it and see some of the key highlights here.

4 hrs 15 mins from kickoff: Today will likely see Pepe get his first start of the 2022 finals, with Danilo Pereira ruled out with a rib injury. It will be the 39-year-old’s 130th cap for Portugal and the eighth time he has played at either a World Cup or European Championship.

4 hrs 45 mins from kickoff: In case you think they’ve forgotten about that 2018 Round of 16 elimination in Portugal, here’s the front cover of Portuguese sports daily Record: “We have a score to settle.”

5 hrs from kickoff: This will be just the fourth time these nations have met with the last encounter coming in the 2018 World Cup Round of 16 match won by Uruguay 2-1 with two goals by Edinson Cavani. La Celeste advanced and lost to eventual champions France in the quarters, a match that scoring hero Cavani missed through injury.

Portugal central defender Danilo Pereira, who started and played the full 90 minutes against Ghana alongside Ruben Dias, suffered a triple rib fracture during Saturday training. Reports are that he’ll be out for the group stage. His replacement is 39-year-old Pepe.

Playmaker Otavio, who started against South Korea, has been experiencing muscle issues that have prevented him from training normally with the team and William Carvalho replaces him in midfield, although Nuno Mendes is fit to start despite a similar problem.

There are no injuries to speak of for Uruguay, but coach Diego Alonso has modified his lineup from a four-man backline to a five-man setup with Sebastian Coates coming in as one of the three center-backs and two wing-backs (Guillermo Varela and Mathias Olivera). Edinson Cavani got the nod up front ahead of Luis Suarez.

The two Group H favorites will face off at Lusail Stadium. Here’s how you can watch all the action in some of the major global territories.

Watch the match on fuboTV in USA:

“I have no idea why, nobody else did”

What’s next for Christian Lee? 3 big fights to make

Blac Chyna Says She Was Joking When She Put Gun To Rob Kardashian’s Head!!

After a ‘challenging’ H1, Netflix beats expectations to add 2.4m subs in Q3