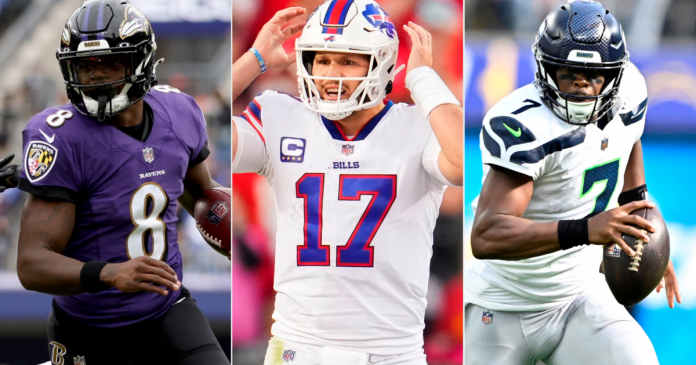 Week 7 of the 2022 NFL season had a couple considerable upsets, but otherwise, good teams played up to the potential and bad teams continued to fade. In theory, after a strong week of picks and predictions against the spread, Week 8 sets up for continued fine results.

The slate of games goes back up to 15 with only the Chargers and Chiefs having a bye. That’s another good opportunity for extra success. As the data points and team identities come more into focus ahead of midseason, there should be growing confidence. But with injuries and other factors coming into play, there’s due diligence required for plenty of remaining games.

NFL picks against the spread for Week 8

The Ravens’ defense has started to play better overall. They are running the ball effectively to support Lamar Jackson, whose production has dropped off of later. The Bucs’ only advantage here is playing at home, given the way the once-reliable passing game and run defense has performed. Tom Brady is still looking for a get-well game, but Baltimore is the wrong opponent for that.

The Packers have never been this big an underdog when quarterbacked by Aaron Rodgers in his prime. They are in an offensive funk because they aren’t running the ball enough and keep trusting too much in a limited wide receiver corps. The Bills’ defense coming off a bye can pressure Rodgers and continue to frustrate his key targets. Green Bay will show a little fight tied to desperation on the road, but its offense and defense isn’t positioned well in this road matchup.

Daniel Jones and Geno Smith have been playing well as quarterbacks everyone doubted. But the real story is the feature backs, as the Giants are rolling with healthy veteran Saquon Barkley and the Seahawks are rocking with rookie Kenneth Walker. This should be a grounded, grinding defensive minded game with the big plays coming from Barkley and Walker. Give the Seahawks the edge for home field and the fact the Giants are coming off a tough road victory.

The Patriots have found their winning formula again with a heavy dose of defense and the running game. The Jets have copycatted that for Zach Wilson, but they are facing a bigger challenge there with rookie Breece Hall going down for the season. New England will avoid New York’s pass defense playmakers well while Belichick thwarts Wilson again.

The Cardinals are coming off a mini bye. The Vikings are coming off an actual bye. Arizona found something more around Kyler Murray with DeAndre Hopkins returning. Murray’s running ability can give the Vikings’ defense fits. The Cardinals’ defense is also making big plays and will capitalize on a few key mistakes from Kirk Cousins.

This might seem like a trap game on the road after Miami had to grind to beat Pittsburgh at home after a slow start. Detroit was scrappy and competitive early, but its defensive ineptitude combined with a constant stream of key offensive injuries around Jared Goff hasn’t been good. The Lions are overmatched here and Dan Campbell’s sneaky coaching revenge game won’t go well as his team gets ripped again.

The Broncos are hoping to get Russell Wilson back from his hamstring injury after yet another listless offensive performance with backup Brett Rypien starting. The Jaguars were game to push the Giants and Travis Etienne Jr. will remain a big part of their offense. The Jaguars won overseas in a mess last season and look much cleaner and better, with the Broncos taking over their dysfunctional mojo.

The Panthers will stick with deserving P.J. Walker as the starting QB with more of at least D’Onta Foreman in a run-heavy offense. Walker also will like his matchups for suddenly hot again No. 1 wideout D.J. Moore. The Falcons will win at home, however, by being relentless with their running game.

The Bears are an inept offensive team with few weapons. The Cowboys’ defense has been up to the task at home and just blew up another awful NFC North team in the Lions. Chicago is coming off a rough short week and expect its worn-down defense to be run down by Dallas’ stronger rushing attack.

The Raiders and Saints scream shootout in the Bayou. Las Vegas will stick with heavy running from red-hot Josh Jacobs and hope that Derek Carr can play well of it against a struggling secondary. New Orleans will be looking for more efficient QB from either Jameis Winston or Andy Dalton and better health for their wide receivers. Still, Alvin Kamara and Chris Olave are a good baseline of weaponry for the Saints to score enough in a losing cause.

These two teams once were mashed up into the “Steagles.” But on opposite sides of the Keystone State, Pittsburgh and Philadelphia are going in very different directions this season. The Steelers’ defense has played better and the offense has flashed with Kenny Pickett, but there are just too many critical mistakes. The Eagles, coming off a bye, will have their defense well rested to thwart Pickett and on the other side, Jalen Hurts and his receivers can cause major problems.

The Titans will hope Ryan Tannehill can play through his tough ankle injury, if not, they can feel good about a run-heavy game plan and Derrick Henry smashing it will lift rookie Malik Willis in his first start. Houston has been game with Dameon Pierce leading its running game and Lovie Smith coaching up decent cover-2 defense. But they also will be overmatched by a division opponent with Davis Mills still making bad decisions.

The Commanders won’t have Carson Wentz returning to start in Indy in a revenge game. But in a twist, Matt Ryan will no longer be Wentz’s replacement, as the Colts are turning to second-year QB Sam Ehlinger for this matchup and the rest of the season. That should spark Jonathan Taylor and talented wideouts Michael Pittman Jr. and Alec Pierce as the Colts look to cut down on mistakes and better support the strong defense.

The 49ers were shell-shocked by the Chiefs’ offense as some key defensive injuries were enough for Patrick Mahomes to go wild. The Rams figure to have more functional pass-happy offense with Matthew Stafford coming out of a bye, but Kyle Shanahan’s team dominated the first matchup defensive and the coach tends to have Sean McVay’s number.

Joe Burrow and Ja’Marr Chase are back on a heater together with plenty of support from Joe Mixon, Tee Higgins and Tyler Boyd. That puts them back in their 2021 Super Bowl-bound form and they won’t relent against a banged-up and underachieving Browns defense. The Browns will try to keep it close with plenty of Nick Chubb on the ground, but not as close as that small number.

Week 7 record against the spread: 8-5

Season record against the spread: 52-54

Why Is Fauci Continuing to Fund EcoHealth Alliance?

Elite Season 6 Trailer: Las Encinas Is Out for Revenge