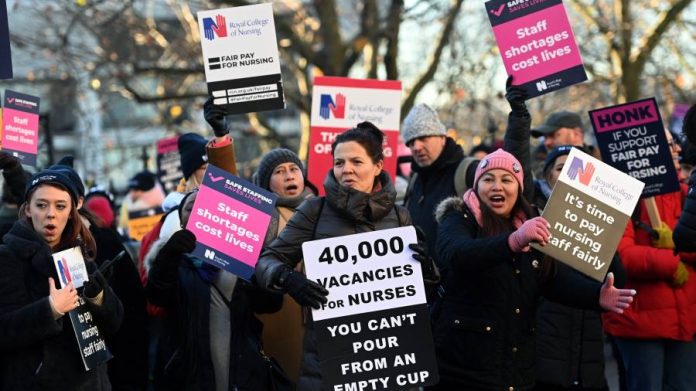 The government on Thursday rejected the case for awarding nurses a better pay deal as they staged a historic strike and some Conservative MPs voiced their support for higher remuneration.

Nurses across England, Wales and Northern Ireland walked out in the first-ever national strike organised by the Royal College of Nursing, which has demanded a 19 per cent pay increase.

The RCN-led industrial action is part of a series of strikes gripping the UK amid the cost of living crisis. Postal workers staged a further day of action on Thursday, and rail industry employees are due to strike again on Friday.

The nurses’ strike affected an estimated 65 NHS trusts in England and Wales and a further 11 in Northern Ireland.

As many as 100,000 nurses walked out, and the government calculated that about 70,000 NHS appointments, procedures and surgeries would not go ahead in England.

Health secretary Steve Barclay said the government “greatly valued” nurses but he pushed back against the RCN’s call for a 19 per cent pay increase.

He told the BBC: “I think asking for 19 per cent at a time when many viewers face significant cost of living pressures is not affordable, given the situation the economy faces.”

In July, the government accepted recommendations from independent pay review bodies covering public sector workers. As a result, most NHS staff in England received a flat rate pay increase of £1,400, backdated to April. This represents an increase of just under 4 per cent in the average basic pay of nurses, or a 5.5 per cent for those who are newly qualified.

Downing Street said there were “no plans” to look again at the pay review bodies’ recommendations.

However, some Conservative MPs called for a better pay deal for nurses. Former health minister Dan Poulter urged the government to “improve on the current offer on the table for nurses”.

Former Tory party chair Jake Berry said the government was “going to have to improve its offer” to striking workers.

Meanwhile Steve Brine, chair of the parliamentary health and select committee, suggested that ministers should encourage the independent body to “look again” at its pay recommendations.

“I think the way out is to protect the integrity of the process, go back and ask them to look again,” he told BBC’s World At One programme. “Everyone needs to cool it and I think sending it back to the pay review body to have a look would be a sensible answer.”

Pat Cullen, RCN general secretary, hinted that the union might be prepared to lower its demand for a 19 per cent pay rise, if ministers engaged in talks on pay.

RCN members in Scotland are currently voting on whether to accept a pay offer that would add about 7.5 per cent to the Scottish NHS wage bill. The offer was rejected on Thursday by GMB union members.

Cullen warned that the strikes on Thursday and next Tuesday “could be the beginning of a longer period of action” if the government continued to refuse formal pay talks, saying it was “tragic” that ministers had decided “not to speak to us”.

Dame Ruth May, England’s chief nurse, joined the picket line outside St Thomas’ Hospital in London, according to The Times, and urged the government to negotiate with the RCN.

“I back all nurses and want to support them to use their voice, whether that’s in there on the wards or out here on the picket lines,” she said.

Strikes over pay and working practices that have crippled rail services for most of this week will resume on Friday, with more than 40,000 members of the RMT union expected to walk out.

The RMT is still holding out against a deal with Network Rail, the infrastructure operator, after the TSSA union said on Thursday that its members had voted to accept a pay offer worth between 9 and 11 per cent over two years.

The move piles pressure on the RMT, whose members rejected the same deal this week on the advice of union leaders.

Andrew Haines, Network Rail’s chief executive, said there had been signs this week of the RMT industrial action “breaking down”, estimating that about 2,000 of the union’s 40,000 members had turned up to work this week, many more than on previous strike days.

However, the TSSA’s move will have little impact on the strikes hitting the railways this month or those scheduled for January. Both the TSSA and the RMT are still in a separate pay dispute with train operators.

Meanwhile, the Public and Commercial Services union announced an escalation of industrial action, with driving instructors at a further seven sites in England due to join strikes at 10 other centres taking place in December and January.

So why won’t Grayscale? By Cointelegraph

Gun Deaths Rose 30% Among U.S. Kids in a Decade