Mikey Musumeci marvels at the buzz ONE is creating for BJJ 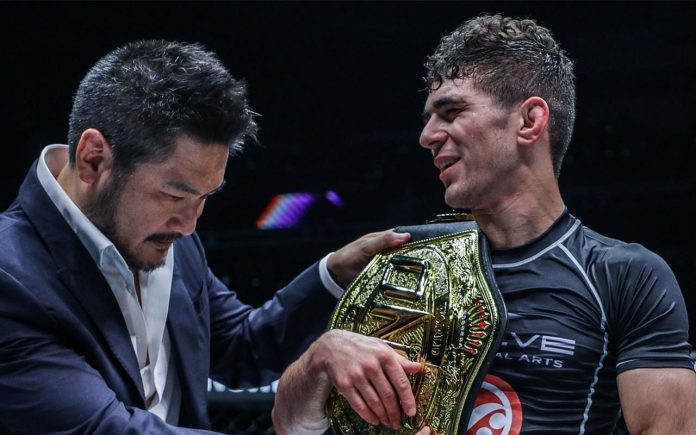 Mikey Musumeci continues to marvel at the buzz ONE Championship has created to further put Brazilian jiu-jitsu on the map.

In the post-fight interview at ONE on Prime Video 2, the 26-year-old star explained how the organization is changing pre-conceived notions of Brazilian-jiu-jitsu as a non-spectator sport. The promotion does this by giving athletes the opportunity to showcase their talents on a world-renowned platform:

“I remember telling all my friends [that] all five times that I won [in] black belt [during] worlds was still like 10% of the publicity and recognition you get for winning one match in ONE. So it just tells you how big this platform is, and what they’re doing for the athletes. You know, we all work so hard and train so hard. So all these athletes deserve this recognition for how hard they train. And ONE is giving us a platform that we deserve. I’m just so thankful to be on this platform, and I thank Chatri so much for this opportunity.”

On September 30, millions of US subscribers tuned in to watch the grappling phenom compete for the inaugural ONE flyweight submission grappling championship. ‘Darth Rigatoni’ drew major fan interest and viral back in April by submitting grappling veteran Masakazu Imanari.

Mikey Musumeci is still in awe at the fact that the attention that his match with Imanari garnered was far more attention in the mainstream media than all five of his IBJJF world title wins combined.

Mikey Musumeci still wants to pull off another submission finish for his fans. Although he didn’t quite get the result he wanted with Cleber Sousa, he believes a grappling match with Demetrious ‘Mighty Mouse’ Johnson could be one for the history books.

In the post-fight interview with Mitch Chilson, Mikey Musumeci said:

“I know me and him could bring the MMA and jiu-jitsu fans together and it would be just be a historic, incredible event. It would be an honor to step on the mat with him.”

Johnson was also crowned this year as the new ONE flyweight world champion in MMA after defeating former flyweight kingpin Adriano Moraes at ONE on Prime Video 1. In past interviews, Johnson said he is looking forward to facing a former division king in Kairat ‘The Kazakh’ Akhmetov, who has accrued 5 consecutive wins over the last four years.

Although a grappling match might be the last thing on his mind, ‘Mighty Mouse’ has never backed out of an opportunity to make history again. Perhaps playing the history card might even motivate Johnson to accept Musumeci’s respectful callout that much sooner.

Miami’s new locker room is sparkling — it would really be nice if its namesake, The Rock, comes by from time to time

Pete Davidson And His Sister Casey At Basketball Game Together: Photos – Hollywood Life