HomeSportsMatt Rhule walks into a buzzsaw at Nebraska
Sports

Matt Rhule walks into a buzzsaw at Nebraska 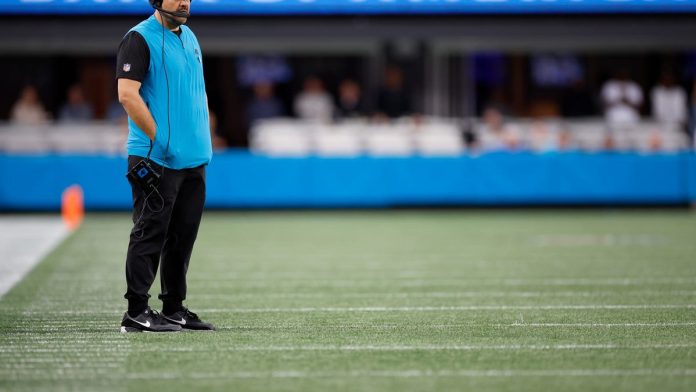 It’ll be interesting to see if the day ever comes when the hiring of a new coach at Nebraska is met with a cavalier attitude. “Well, shit, why not him?” is only uttered when the university names a men’s basketball coach.

That’s why Matt Rhule is starting in a trailing position after accepting the position in Lincoln. He’s not a native son of Nebraska, nor is he a splashy candidate like Deion Sanders or Urban Meyer. Rhule is a perfectly modest hire by a very modest athletic director in Trev Alberts, yet the expectations are anything but modest. (He also had the right, umm, background that interim coach Mickey Joseph did not.)

In an interview with College Gameday on Saturday morning, Rhule rattled off all the reasons why he holds the position in such high regard. The tradition, the fans, the history. Whether it’s those reasons, or an eight-year contract, that persuaded him, I don’t know. What I do know is the reasons he listed also are why the task before him is tougher than what he faced at Temple, or Baylor, or even Carolina.

Rhule will have to win over an obsessive fanbase at their orneriest and most pessimistic. If the Huskers have a shitty inaugural season under his watch, it won’t go overlooked like the first years at Baylor or Temple when he won one and two games, respectively. While a rough 2023 wouldn’t be a complete surprise to the national media, given the team is coming off a four-win season following two three-win campaigns, it would be a story.

I don’t think Rhule realizes that in Nebraska, the Huskers are the only story. Every Sunday World-Herald in the fall has the game’s outcome front and center on the cover. Sports talk radio doubles as a safe space for fans to bemoan the state of the program and regurgitate easy fixes that have been tried and failed more or less since the beginning of the century. Small talk in grocery aisles begins and ends with what’s happening in Lincoln.

There is no place like Nebraska because most like NU have receded to the periphery of college football. It’s hard for programs with unrealistic goals to just be respectable. Look at Miami, Florida State, Texas, or Virginia Tech. They haven’t met fans’ standards in a long time, and the pressure to produce results leads to turnover.

And if Nebraska is No. 1 in any poll related to college football, it’s staff turnover. Rhule will be the sixth coach since Tom Osborne stepped down in 1997. That’s, what, a new multimillion dollar head man every five years? That’s not a blueprint for building a program, or maintaining a culture.

A new coach every handful of years is something you’d expect out of the Cleveland Browns or Detroit Lions, franchises that are widely considered trainwrecks in the NFL. Be that as it may, speed dating is the formula for college programs trying to regain past glory because look at what Rhule did at Baylor or Frost at UCF in a small period of time. Fans and ADs view those programs as dogshit, and logic says if you can win that quickly with the resources of Devry, you can do even better with more tools at your disposal.

That is until arriving on campus to find a roster full of players who are content losing games as long as they can still swing their dicks around Austin or Coral Gables. And even though there’s little reason for it, the preseason hype train gets momentum. Soon enough some dumbass convinces other dumbasses that a top 25 ranking is appropriate, and then that ranking only serves as more evidence that the coach was overrated or was never good in the first place. He gets fired, and the charade begins anew.

Not every new face is going to turn into Josh Heupel, and if you remember, the Tennessee coach wasn’t exactly the fanbase’s first choice.

To call it a vicious cycle would be an understatement. Michigan was damn near ready to run out Jim Harbaugh before his team finally started playing his brand of football. There are only so many coaches capable of putting together a perennial contender, and even then a lot of skippers in the top echelon haven’t planted their flags atop the game’s peak.

Lincoln Riley, Ryan Day, Brian Kelly, Chip Kelly, and Harbaugh are all title-less. Jimbo Fisher had a championship and is still about to get shown the door in College Station. Mario Cristobal is learning first-hand how far the Hurricanes are from getting their mojo back. Wisconsin decided this year that their recent run of success dictates Paul Chryst is a failure, and are looking at a buffet of mediocrity to replace him.

So, best of luck to Coach Rhule. Right now is likely as good as it’s going to get, because nothing other than a top 15 finish is going to satisfy the “best” fans in college football.

Biden to cancel $10,000 of student debt for millions of Americans