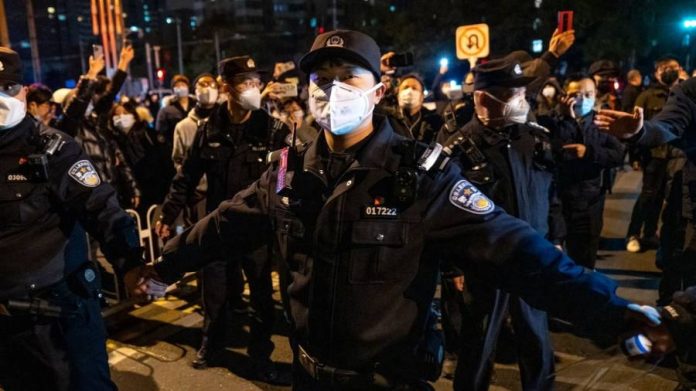 China’s most important state and party media reiterated the country’s commitment to its strict zero-Covid policy on Monday following a weekend in which rare protests burst out in cities across the country.

The People’s Daily, the official mouthpiece of the Chinese Communist party, published a front-page editorial, under the authorship of Zhong Yin, a pen name seen as indicating the party line on Covid policy. The article called for “improving the effectiveness of anti-epidemic work” and hailed the recently announced “20 measures” aimed at a partial easing of the zero-Covid policy.

It added that eradicating outbreaks early was crucial to the success of the approach, underlining an important tenet of the zero-Covid approach.

Earlier this month, the government eased quarantine requirements for close contacts and international travellers, in the first marginal relaxation of Xi Jinping’s zero-Covid strategy since the policy was reaffirmed at the Communist party congress in October.

But spiralling caseloads, which have continued to rise after reaching record levels last week, have triggered a wave of lockdowns and curbs across the country.

Xinhua, the official government news agency, on Monday published an editorial that called on the country to stick “unswervingly” to the principle of “putting the people’s lives first”, and prevent “importing [the virus] from overseas” and prevent its “rebounding domestically”, two phrases associated with Beijing’s zero-Covid strategy.

I Have 5G on My Phone At Home. So Why Can’t I Get 5G Home Internet?