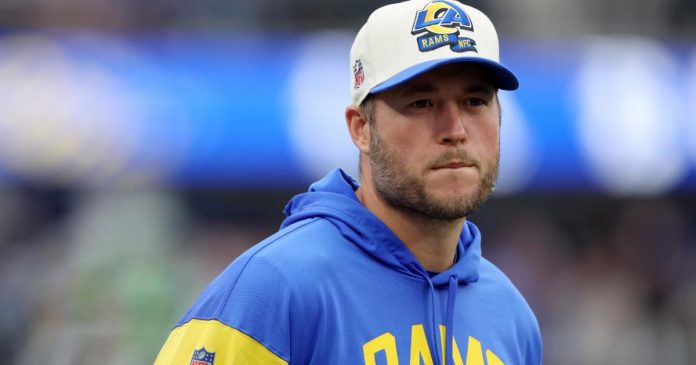 When it’s all said and done, we might be saying both sides won the Matthew Stafford trade.

The Rams, bluntly, have already won. They won a Super Bowl behind Matthew Stafford. He did what he came to Los Angeles to do.

The Lions, meanwhile, are still waiting to see what happens with their side of the deal. They already bundled the No. 32 pick they received from the Rams in the first round last year to trade up for Jameson Williams. But this year, they could end up in an even better spot with no movement whatsoever.

The Rams, of course, traded their 2023 first-rounder to the Lions as well, alongside quarterback Jared Goff, who has played some solid football in the past five weeks. Here’s a refresher on the 2021 trade:

The 2023 first round pick has become the lynchpin upon which this trade will be evaluated. With the Rams at 3-9 on the year, they’re lined up to pick fourth, behind the Texans, Bears, and Broncos. Adding to it, the Lions seem to be on the rise, having won four of their last five games to move to 5-7. Their current pick is 15th.

Why the Rams could get the Lions a top five pick

The Rams have put the Lions in an advantageous situation. Without having to tank themselves, they look to the Rams for whatever the next piece of their rebuild is.

The reality is they’re still likely looking out for a top-level quarterback, as Goff — despite his improved play recently — likely isn’t viewed as the QB of the future internally.

Adding to it, the Rams don’t seem to be trending up. Matthew Stafford is likely out for the year with a spinal contusion, meaning John Wolford, Bryce Perkins, and Baker Mayfield comprise the Rams’ QB depth chart. The Rams don’t have incentive to punt on the season without a first round pick, but they don’t have the means to make things much better either.

In fact, as of Thursday, the Nos. 3, 4, and 5 spots have all been traded away in deals that, with the benefit of hindsight, didn’t pan out. The Broncos, Rams, and Saints — in that order — have traded those picks to the Seahawks, Lions, and Eagles, respectively.

Here’s a look at the draft order as of Thursday.

Again, this still doesn’t mean the Lions won the trade. The Rams got what they wanted out of it. But if we view 2022 in a vacuum, they certainly made out well. For a team trending in their direction, getting more top picks will be invaluable for the Lions. As they looks ahead to their third year with Dan Campbell next season, the future in Detroit must be looking brighter than it has in some time. In 2023, perhaps they can finally make the pieces come together and declare the trade a true mutual victory for both sides.

Prop bets for Game 2 of Oilers vs. Avalanche