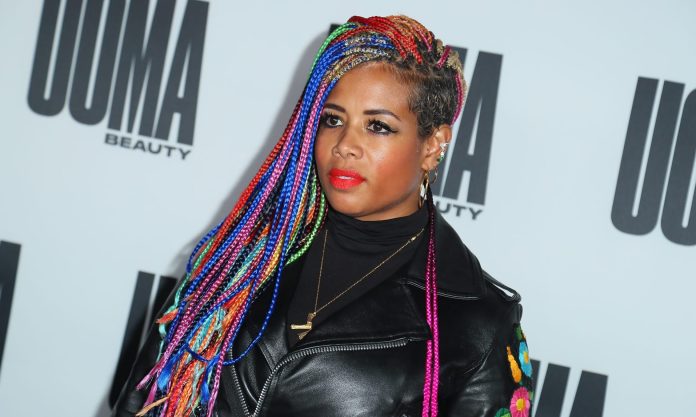 It looks like Kelis pulls more than just the boys to her yard! Two Asian women decided to invade the singer’s personal space for an uninvited inspection of her twisted hairstyle.

On Friday (Oct. 21), the singer shared a video on her verified Instagram of two strangers seemingly unaware (or uncaring) of the disrespectful tone of touching someone’s hair, particularly a Black person’s hair, without their greenlight.

According to multiple reports, Kelis was spending time in Singapore when the unidentified strangers positioned themselves behind her. The entertainer appeared to be sitting with another person in a restaurant-like atmosphere–given the angle and voice behind the recorded interaction.

How Kelis Reacted To Strangers Playing In Her Crown

The video begins as the two casually dressed women are already fistfuls into studying Kelis’s copper-colored twists. Dressed in jeans and a flower-printed red crop top, the singer shared displeased facial expressions with the person recording the moment.

Meanwhile, the two women spoke to each other in an Asian language as they shamelessly inspected multiple twisted strands of the waist-length look. At one point, the woman dressed in yellow backed away slightly when she noticed she was being recorded.

But her friend continued holding and examining Kelis’s hair after the singer turned around to face her–even mumbling “wow” at the hair pattern.

Kelis returned the woman’s unwavering gesture by reaching up and grabbing a piece of her straight, black hair. But the woman remained unphased. Instead, she responded by grabbing her hair, sharing a few words in her language, and giving Kelis a thumbs up.

Then, both women resumed their invasion of Kelis’s space and hair. They spoke to each other, nodded, and continued to run their hands along the length of the twists. Kelis and her company shared stifled laughs between the women’s oblivious actions.

Kelis Lets The Moment Ride In Between Sarcastic Laughter

At the near end of the video, the person recording encouraged Kelis to “just embrace it.”

“Oh I like to be touched,” Kelis sarcastically responded. “It’s great.”

The person recording continued to laugh. And Kelis seemingly tried to direct the women’s attention elsewhere, but the video cuts off just before viewers can see the final result. It’s unclear how long the interaction lasted or if Kelis eventually lost her patience with the exhibit-like treatment. However, Kelis’s caption tone seemed casual for an offense generally not taken lightly.

“I don’t even know what to say here. Happy Freedom Friday fam,” she wrote.

As of Monday, Kelis hasn’t shared additional comments about the women’s invasive curiosity.

Tory Lanez Gets Ankle Bracelet To Start House Arrest, Seen Laughing It Off