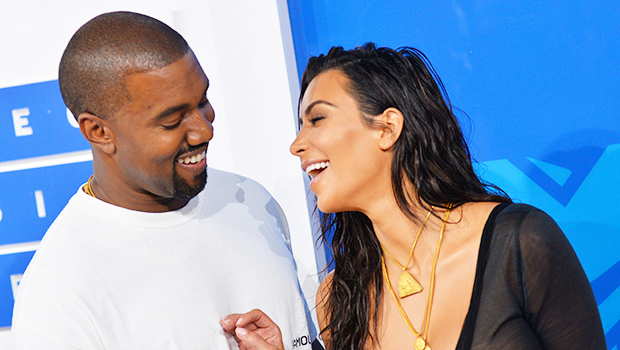 Kim Kardashian represented Prada while attending Milan Fashion Week in Feb. 2022, and it was documented on the Oct. 6 episode of The Kardashians. While Kim was preparing one of her Prada look, she got a text from her ex, Kanye West, which she showed to longtime friend, Tracy Romulus. “Look what Kanye texted me: ‘No white glasses, better make security wear black, the orange look made me so mad. Would’ve went to jail before I went out in that,’” Kim read. She laughed as she showed Tracy the message, even though it clearly mocked her outfit choices.

In a confessional, Kim explained why she had such a lighthearted reaction to Kanye’s text. “While we’re in Milan, Kanye has the kids at home. He can’t help himself,” she laughed. “We can laugh about things we like an  don’t like. No matter how crazy things are sometimes, we’re always going to be family. I’ll text him back and be like, ‘You know, you’ve been wearing those boots for a long time, so when you’re ready to change your outfit, let me know and then you can have advice on mine!’”

After splitting from Kanye in Feb. 2021, Kim began to branch out on her own in fashion and develop her own sense of style. She landed a Vogue cover, posed for Sports Illustrated Swimsuit and shot a campaign for Balenciaga during the first season of The Kardashians. However, that hasn’t stopped Kanye from commenting on what Kim’s worn out in public!

The two have had plenty of ups and downs following their split, but Kim has remained steadfast in wanting to co-parent amicably with the rapper. Kim and Kanye have four children together. Just days after Kim returned from Milan in Feb. 2022, the exes were declared “legally single” after a judge agreed to “terminate and bifurcate” the marriage as they worked out other issues in their divorce settlement.

Meanwhile, the Milan trip came after Kanye publicly attacked Kim and her then-boyfriend, Pete Davidson, on social media. Kim filed court documents slamming Kanye for sharing their private communications online and spreading “misinformation” with his Instagram posts. Despite the clear drama between them at the time, though, Kim was still able to laugh at Kanye’s comments about her style!

Kim Kardashian As Marilyn Monroe: All The Times She’s Looked Like The Blonde Bombshell

Was the Miami Dolphins’ butt block the greatest NFL play since the Butt Fumble?

EXCLUSIVE: Rihanna BURST INTO TEARS When Police Arrested Baby Father In Front Of Her!!