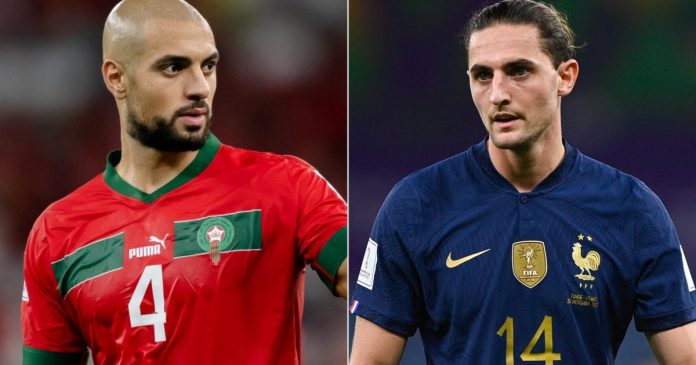 There are so many intriguing storylines for fans and pundits that accompany the France vs Morocco semifinal at the World Cup.

France have the chance to qualify for back-to-back finals and continue their quest to win a second World Cup in a row, whilst Morocco — who have already become the first ever African side to reach the semifinals — are aiming to claim their biggest scalp yet whilst also becoming arguably the most surprising team to ever reach the final.

Yet the match is also unique as it sees two countries collide that also have a long history of engagement away from the field spanning multiple centuries, and it hasn’t always been civil.

The Sporting News looks at the relations between France and Morocco over time, and how the match will affect the large Moroccan-French diaspora.

Relations between what is now modern day France and Morocco began way back in the 9th century. This increased as time went on until relations became more strained in the 1830s, as France under Napoleon sought to expand their sphere of influence into Morocco.

The two countries fought the first Franco-Moroccan War in 1844, which concerned Morocco’s support of Algeria’s Al-Ebd-Kader against France. France would win the war and a peace agreement was signed later in that year.

France then occupied Morocco militarily in 1907, and the North African country later became a protectorate of France, though legally speaking Morocco was still a sovereign state. This lasted until 1955 when King Mohammed V of Morocco began to restore Moroccan independence from the French.

Whilst that was a bumpy process at times in the years immediately after Moroccan independence, the countries relations have been largely warm, with both countries trading economically as well as in terms of education, with many Moroccan students choosing to spend some of their education studying in France.

Despite relations being mostly positive, there have been some instances of tension in recent times between the two countries.

In 2021, the French government announced the amount of visa’s that would be handed out to several North African countries including Morocco would be decreased dramatically due to claims that authorities in these countries were refusing to collaborate with the French in stemming the tide of illegal immigrants into Europe.

There has also been issues surrounding the continuing conflict between Morocco and Western Saharan fighters who are looking to claim independence for Western Sahara from Morocco, with Morocco garnering criticism in some quarters for their actions.

How many Moroccans live in France?

The Moroccan diaspora in France is listed at around 1 million, whilst the 2011 French census listed just over 433,000 people who were originally born in Morocco.

There was a surge of immigration from Morocco to France in the 1960s, as many looked to settle in the European country due to the favourable economic conditions and opportunities afforded to them by living in France.

In fact, two of the Moroccan players in the squad that will face France tomorrow were actually born in France; Romain Saiss was born in Bourg-de-Peag, whilst Sofiane Boufal was born in Paris.

Whilst French is not one of the official languages in Morocco, it is widely used in government documents, media, large companies and international diplomacy. French is also taught as an obligatory language in all Moroccan schools.

It is believed that around 32 per cent of the population (around 10 million people) spoke French in Morocco.

The official languages of Morocco are Arabic (with the dialect of Moroccan Arabic commonly used) and Berber, whilst Spanish and English are also used to a significant degree.

Does Morocco have a president? How country is governed

Morocco is a semi-constitutional monarchy, with a king as head of state who then chooses a Prime Minister from the most popular political party.

The current king is Mohammed VI, who ascended to the throne in 1999. His reign has seen women granted more power in a series of reforms, but also protests against corruption in 2011. In the wake of this, more reforms were passed as well as a new constitution.

The current Prime Minister is Aziz Akhannouch, who has served since October 2021. The Prime Minister and his government handle much of the day to day running of the country including the public sector, but the King has special executive powers and exclusive authority over the military, religion and judiciary.

The surprise progression of Morocco to the semifinals has left French-Moroccans with a difficult choice to make on which of their countries to support.

However, it would appear that many have made their choice, with around 20,000 fans gathering in the Champs-Elysees in Paris in the aftermath of Morocco’s quarterfinal win over Portugal in celebration.

Despite the scenes of colour and joy, it soon got more serious as police had to get involved, and 119 fans were arrested and a small number of police suffered minor injuries.

It will be interesting to see how fans of both countries in France mix on gameday, and what kinds of scenes will be seen at full-time regardless of the result.

A new day for Giants’ Daniel Jones could be short-lived

Steven Spielberg’s Movie ‘The Fabelmans’ Gets Standing O at TIFF