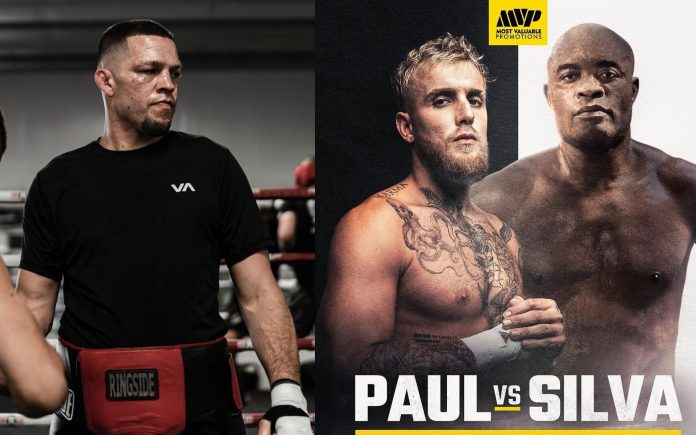 Mike Perry has extended his callout for a fight against Nate Diaz outside the combat sports ring.

In a recent interview, Perry, who had initially called out the Stockton native for a fight under the Bare Knuckle Fighting Championship banner, welcomed Diaz to jump him at the at Jake Paul vs. Anderson Silva event that goes down tonight.

Nate Diaz most recently became a free agent after bowing out of his UFC contract when he beat Tony Ferguson via submission at UFC 279. Several top-tier fight organizations in the world of combat sports, ranging from bare-knuckle fighting to MMA, have been chasing the American to sign with them.

During an interview with The Schmo, Mike Perry called out Diaz yet again. This time Perry invited him to carry on the infamous brawling adventures of the Diaz brothers if they cross paths at the Jake Paul vs. Anderson Silva event:

“We can have some fun and have some drinks. I don’t know if you drink….if they have vegan tequila. It’s whatever, man.. I’m down.”

Watch the full interview below:

Nate Diaz will be in attendance at the upcoming professional boxing match contested between Paul and Silva since his teammate Chris Avila is scheduled to fight on the same card. Avila faces Russian-born American internet personality Doctor Mike.

The most sought-after free agent in combat sports, Nate Diaz, was present at the final press conference for the upcoming clash between Jake Paul and Anderson Silva inside the boxing ring. Diaz’s teammate, Chris Avila, who also had a brief stint with the UFC, is booked to fight Doctor Mike on the undercard of the event.

While the YouTuber-turned-pugilist faces the biggest test of his boxing career when he faces Silva, Paul is perhaps building towards a potential fight against Diaz, who has been persistently chasing a fight.

Paul even hit out at the American combatant following his vicious knockout victory over Tyron Woodley in their rematch billed as “Leave No Doubt”:

“Masvidal and Nate Diaz, y’all are some b***hes for leaving this arena. I know you both don’t want that shit. I’ll take both of y’all next. Just get out of your contract with daddy Dana [White] and I’m going to f**k them up too.”

Watch the post-fight interview below:

Here’s my post-fight interview with @jakepaul after his vicious KO of Tyron Woodley.

What a scene.Here’s my post-fight interview with @jakepaul after his vicious KO of Tyron Woodley. https://t.co/8hQG2oHlYQ

Diaz, who’s known for his nonchalant yet pugnacious mentality, flipped off ‘The Problem Child’ when the clip was played during the final press conference for the upcoming event.

Watch the video below:

Finnish PM scandal shows that shaking up politics has its cost