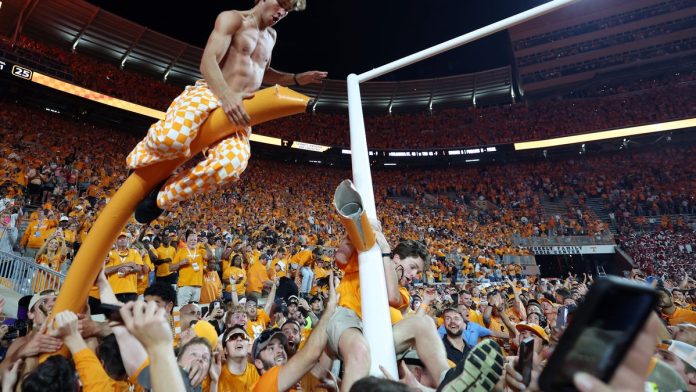 Coming into the weekend, we knew at least three unbeaten programs were guaranteed to end Saturday with a smudge on their immaculate records as six perfect top 13 teams were set to face off against each other.

Michigan and Penn State were up first, and the way the Wolverines bludgeoned the Nittany Lions to the tune of 418 yards on the ground en route to a 41-17 romp, I was ready for another wave of favorites maintaining the status quo.

G/O Media may get a commission

Elevate your home theater
With Prime Day coming to an end, you may have been disappointed not to score some big deal on a new TV. If this is the case, we have wonderful, wonderful news. Samsung is launching an Early Black Friday sale with nearly its entire lineup of TVs and projectors seeing some level of discount.

And one more time for good measure.

Three different fan bases rushed the field after knocking off a top 10 team, and college football had the kind of 12-hour span that makes it one of the most fun sports from week to week. Give college students the slightest reason to rush a court or field, and they’ll take it. But give them a reason to celebrate through the night like there’s no limit to their livers and a very finite amount of time to revel in the best years of their lives, and they will oblige you and then some.

There were seemingly 15 million turning points of the Tennessee-Alabama meteor shower. Both teams got huge pass interference calls that let them tie the game. Crucial turnovers led to scores for each squad, but more importantly this Nick Saban reaction.

It seemed like the Vols were teetering with implosion the entire second half after getting out to a 28-10 lead in the first. When Hendon Hooker and Jabari Small had a miscommunication on a handoff that led to a Tide scoop-and-score and a seven point lead with seven minutes and change in the fourth quarter, it felt like Saban’s Thanos-esque inevitability was getting snapped into reality.

Yet each time Bryce Young or Jahmyr Gibbs made a play — and they made gobs of eye-popping plays — Hooker and wideout Jalin Hyatt had an answer. Hyatt had six grabs for 207 yards and was on the receiving end of all five of Hooker’s touchdown passes.

The UT defense couldn’t get Young off the field, and if the Heisman winner was injured you’d never know with the throws he made and the hits he took. We’re conditioned to expect the Tide to break an opponent, and perhaps they would’ve if not for the 17 penalties they were flagged for, a high under Saban.

At the same time, Bama’s defense was hemorrhaging yards, and they desperately needed every point. Alabama had 569 yards of offense, and Tennessee had 567. Josh Heupel coached like he had a team on its heels, going for it on fourth down in no man’s land, and also trying to score, however risky.

The Volunteers got the ball back with 36 seconds left in the first half, and got into a position to throw a Hail Mary, which Joe Milton, Hendon’s backup with a stronger arm, nearly converted. After Will Reichard missed a field goal that would’ve given Bama the lead with 15 seconds left in the game, Heupel said fuck it, I have a legit Heisman candidate of my own and two time outs; we’re not going to kneel it out to go to OT.

Hooker linked up with Ramel Keyton for 18 yards to the 50, and UT called a timeout with nine ticks remaining. Then he found Bru McCoy for 27 more yards, he got down, and UT stopped the clock with 2 seconds left.

When UT kicker Chase McGrath connected, the ball had an odd wobble to it, and for a brief moment I thought it was short and Alabama had another life. It knuckled through though, and after 15 years of Ls at the hands of Saban, Knoxville got to light the victory cigars on the third Saturday in October.

Utah and USC featured more than 1,100 yards of offense and 85 total points. It would’ve been the game of the week, maybe month, during any other day/week/month that didn’t feature that Tennessee-Alabama game. Reigning Pac-12 champs Utah felt like they were due for a big win after failing to beat Florida and UCLA on the road, and coach Kyle Whittingham showed why playing the Utes will always be a bitch under his watch. Neither team settled for a field goal, and Caleb Williams had the Trojans up by 14 three different times.

Cam Rising and the Utes kept coming back, even after a fumble at the USC 11 with five minutes left in the fourth quarter. The quarterback scored on fourth and goal from the one with 48 seconds left, and Whittingham decided he was done playing from behind, opting to go for the ol’ Tom Osborne — two points and the win.

Rising also ran that in and, after 59 minute and 12 seconds, gave the Utes their first lead of the contest, 43-42. Williams couldn’t get USC in range for a game-winning field goal attempt, and that’s how it ended. Everyone kept waiting for the Trojans’ opportunistic defense to cost them a game, and Rising crushed them into a fine powder, accounting for 475 total yards and five total touchdowns.

The Horned Frogs entered the fourth quarter down 14 to Mike Gundy and the Cowboys before rallying to even the game with two minutes remaining. Neither team pulled ahead, and the game went into overtime. Oklahoma State answered TCU’s touchdown with a TD of its own, but had to settle for a field goal in the front end of the second overtime. Frog running back Kendra Miller and QB Max Duggan traded off carries until Miller scored from two yards out for a 43-40 win.

TCU is the last remaining undefeated team in their conference, and looks to be as good a candidate as any to come out of the ball security drill that is Big 12 football holding the trophy. Coach Sonny Dykes is the perfect kind of Texan for a Big 12 school in Texas not named the Longhorns. With Nos. 7, 8, and 10 all losing, the Frogs could be in the top 10 for the first time since 2017. If not this week, certainly next week with a win over Kansas State.

This Law Plays A Key Role In Government Expenses

Rams wanted to scoop up Garoppolo if 49ers released him: reports

Pilot in Custody After Threatening to Crash Plane Into Mississippi Walmart