HomeBusinessClimate talks fall short on the most crucial test
Business

Climate talks fall short on the most crucial test 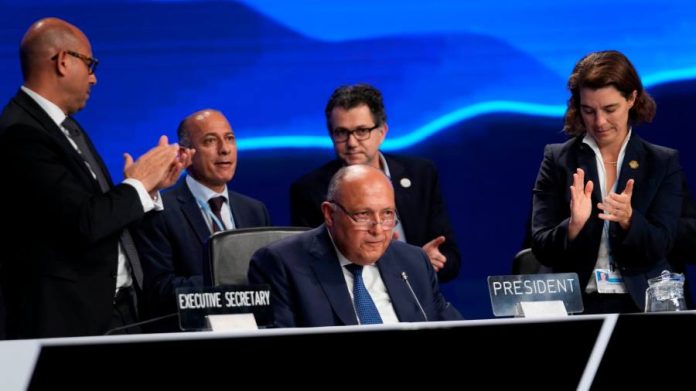 Yet the two-week Egyptian COP managed to sink below even the meagre expectations held for it on the most crucial test. At a meeting held in the shadow of floods in Pakistan that Islamabad has called “the climate event of the century”, this was the moment to send a vivid political signal that the world is ready to crack down faster on the fossil fuels driving up global temperatures.

Many nations wanted to build on an agreement reached after much wrangling a year ago at COP26 in Glasgow to phase down unchecked coal use. Yet a proposal led by India to agree to wind down consumption of all fossil fuels, not just coal, foundered after opposition from oil and gas producers such as Saudi Arabia and Russia.

These nations undoubtedly feel emboldened to resist international pressure to cut the global use of fuels that underpin their economies. The loss of fossil fuel supplies from Russia following the invasion of Ukraine has led a series of western leaders to seek new energy deals with Riyadh.

The consequences of such geopolitical realities are one reason COP27 did secure a breakthrough that has eluded every UN climate summit since the first in 1995. An agreement to set up a loss and damage fund to help poor countries most vulnerable to a rising toll of climate-fuelled disasters was overdue.

Lives and livelihoods in these nations are already under threat in a world that is steadily warming because of greenhouse gases historically emitted by wealthy countries. There is clearly a moral case for classing payments from the new fund as a form of reparations, but this is not what has been agreed. Wealthy nations would never have signed off on a deal amounting to an admission of liability, or open-ended compensation claims, and many will face a domestic backlash for agreeing to the new financing body.

Decisions on who will cough up the money for the fund and who will receive it have been deferred to future COPs after a failed but necessary effort to ensure countries such as China helped to shoulder the financial burden. The world’s second-largest economy has traditionally avoided taking on such responsibilities in UN climate talks, where it has long been classified alongside other developing countries. But its rapidly rising wealth and the fact it is by far the world’s largest carbon polluter means it must take on more responsibility for a climate problem that cannot be fixed without it.

The new fund was not COP27’s sole achievement. Countries also agreed to back reforms at multilateral development banks to scale up climate finance and make these bodies fit for purpose in a warming world. In addition, wealthy countries launched a plan to deliver $20bn of public and private finance to help Indonesia cut its heavy reliance on coal. This builds on an $8.5bn initiative announced last year in Glasgow to help South Africa shift away from most polluting fossil fuel.

There were advances, too, on steps launched in Glasgow to halt forest loss, expand zero emissions vehicles and ensure the net zero pledges of businesses and financial bodies are robust.

Each underlines the fact that these sprawling UN summits can still make progress in some areas. But on the central challenge of reducing fossil fuel use and carbon emissions, COP27 has left an alarming hole that future gatherings will have to work even harder to fill.

Live news updates: The week ahead

Britain’s next prime minister to be announced