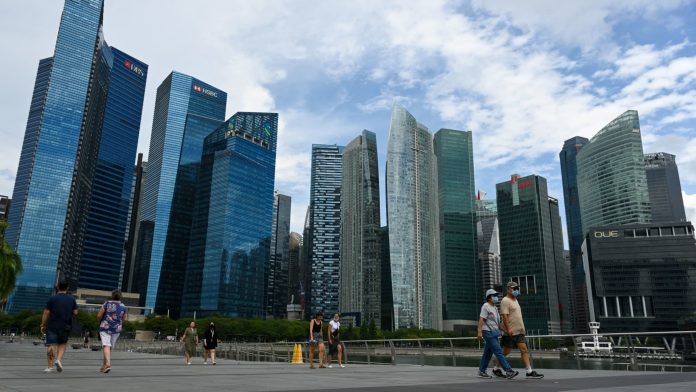 In Singapore, nearly 90% of Singapore CEOs have embarked on or are planning a hiring freeze over the next six months, KPMG says.

Global CEOs are anticipating a recession in the next 12 months, according to a new survey by professional services firm KPMG, which said more than half of the business leaders polled expect the slowdown to be “mild and short.”

A majority of the 1,300 chief executives polled by KPMG between July and August warned, however, that increased disruptions — such as a recession — could make it difficult for their businesses to rebound from the pandemic.

That said, the CEOs expressed more optimistim compared to the start of the year, and said there would be growth prospects in the next three years.

“CEOs worldwide are displaying greater confidence, grit and tenacity in riding out the short-term economic impacts to their businesses as seen in their rising confidence in the global economy and their optimism over a three-year horizon,” said KPMG Singapore managing partner, Ong Pang Thye.

“We are also seeing many positioning for long-term growth, such as in Singapore where about 80% of CEOs have indicated that their corporate purpose will have the greatest impact in building customer relationships over the next three years.”

Globally, CEOs are also viewing mergers, acquisitions and innovation favorably, but many are concerned that dealmakers are “taking a much sharper pencil to the numbers and focus on value creation to unlock and track deal value,” the KPMG report said.

Across the globe, aside from recessions and the economic impact of rising interest rates, CEOs are also worried about pandemic fatigue, KPMG said.

On top of immediate challenges such as a recession, business leaders say they remain under pressure to meet their broader social responsibilities in the face of public scrutiny on their corporate purpose and environmental, social and governance (ESG) accountabilities.

In Asia-Pacific, fewer CEOs are expecting a recession. Of those surveyed, 63% saw a recession happening in the next year compared with 86% globally.

But they are also less optimistic about growth in the next three years compared with their global peers.

Globally and in Asia-Pacific, about 20% say they will not expand hiring in the next three years and will keep their headcount or reduce it further.

In Singapore, nearly 90% of the CEOs surveyed either embarked on a hiring freeze, or were planning to do so over the next six months, KPMG said.

Almost all of them were taking or planning diversifications in their supply chains.

But over the next three years, almost all Singapore CEOs surveyed said they would increase their headcount by up to 10%.

“Nearly a third of Singapore CEOs say their top operational priority over the next three years will be to strengthen their employee value proposition to attract and retain the necessary talent,” the survey showed.

Changes in global corporate tax rules are at the front of mind for Singapore’s business leaders. Many have developed a better grasp of the new global tax rules even though those have been delayed to 2024, KPMG says.

Singapore is part of a global framework for the reform of international tax rules which backs a global minimum effective corporate tax of 15%. The new agreement is aimed at stopping companies from shifting profits to low-tax havens.

Truss finally admits defeat on tax benefit for the wealthy

While everyone waits for GPT-4, OpenAI is still fixing its predecessor