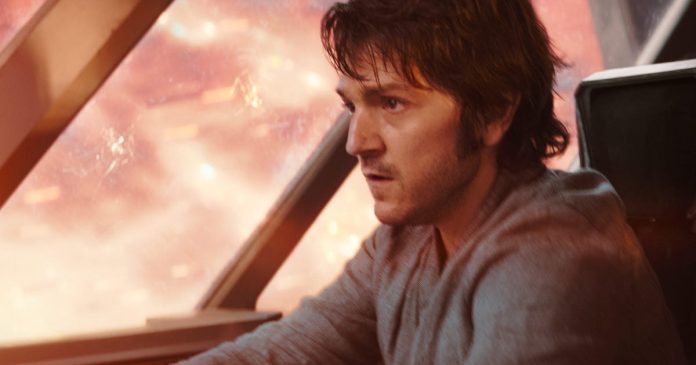 Episode 6 of Star Wars series Andor hit Disney Plus on Wednesday, with Cassian (Diego Luna) continuing his journey to becoming the Rebel Alliance hero we meet in Rogue One. He seems to have earned the trust of his new rebel buddies as they gear up for a heist on an Imperial garrison, where they’re gonna steal a huge pile of money.

Unless it all goes horribly wrong and they’re slaughtered. The only one guaranteed to survive is Cassian.

On galactic capital Coruscant, the rebellion against the Empire is being orchestrated by Senator Mon Mothma (Genevieve O’Reilly) and recruiter Luthen Rael (Stellan Skarsgård). They’re trying desperately to stay ahead of the Empire’s spies and informants.

Unfortunately for them, Cassian’s past thievery has drawn the attention of magnificently dressed Imperial Security Bureau Supervisor Dedra Meero (Denise Gough), who reckons it points to a wider rebellion. She’s 100% right, but her bureaucratic superiors will take some convincing.

Andor takes place five years prior to Rogue One, which depicted the events immediately before original Star Wars film A New Hope. Scroll down further if you want to join a heist on all of episode 6’s SPOILERS.

ALDHANI — Much like last week’s, this episode is super focused on the rebel crew as they make their move on the Imperial garrison using a celestial event — a massive, magnificent meteor show known as the Eye of Alhani — as cover. It’s in a dam, which is always a dramatic location for your base.

Meanwhile, team leader Vel Sartha (Faye Marsay) and the quietly intense Cinta Kaz (Varada Sethu) infiltrate the dam underwater, a bit like Obi-Wan Kenobi did in his own show.

The squad quietly captures Imperial Commandant Jayhold Beehaz (Stanley Townsend), his wife, his son and a visiting engineer. Things get tense when the engineer briefly catches Nemik at blasterpoint and demands the rebels release the boy, Cinta proves how dangerous she is by taking the guy out.

So things are going according to plan and everything is definitely gonna be fine (except for the engineer).

It wouldn’t be a very exciting TV show heist if everything went smoothly. An Imperial comms officer grows suspicious when he discovers that their signals are being jammed and overhears the rebels’ radio chatter. He leads a squad into the vault as our heroes force captive Imperials to load the heavy stacks of Imperial credits onto a transport freighter.

The confrontation is all a bit much for the stressed out Commandant Beehaz, who suffers medical distress and hits the floor. Then the shooting starts, claiming the lives of Lt. Gorn and Taramyn.

Cool under pressure (and one guy’s attempt to choke him to death), Cassian flies the freighter out of the base.  Unfortunately, Nemik is badly injured when one of the heavy payroll pallets rolls back in the vessel, pinning him.

Despite his wounds, Nemik has enough awesomeness left to relay a flight path that allows Cassian to navigate the deadly meteor show. The pursuing TIE fighters aren’t sufficiently awesome because Imperial tech is kinda cheap and crappy, so they get destroyed in the chase.

Instead of going straight to the rebel base with the money, Skeen persuades Vel to take Nemik to a doctor on a remote world. As the awesomely named Doctor Quadpaw (Aidan Cook), who seems to have ocular implants similar to Ochi of Bestoon) operates on the young rebel under Vel’s supervision, Skeen and Cassian wait outside.

Appealing to Cassian’s mercenary tendencies, Skeen suggests they betray the rebels and run off with the stolen 80 million credits. They’ll split them evenly and go their separate ways. Turns out Skeen’s extremely sympathetic story about his brother being wronged by the Empire and taking his own life was a dirty big lie too.

“So no rebellion for you?” a disappointed Cassian asks, before shooting Skeen dramatically as he relays his sneaky plan.

Nemik dies on the operating table, just like Vel predicted (turns out Skeen was just taking the opportunity to make his move).

Mere moments after the young rebel’s death, a disillusioned Cassian waves his blaster in Vel and Quadpaw’s faces, demanding his cut so he can get away from all this unsettling moral ambiguity. He gives the kyber crystal necklace to Vel to return to Luthen, seemingly symbolizing his rejection of the rebellion.

However, Vel gives Cassian Nemik’s super compelling rebel manifesto. That and the Empire stomping down on his loved ones back on Ferrix will probably convince Cassian he has to do a Rogue One.

CORUSCANT, THE GALACTIC CAPITAL — The Empire freaks out about the heist, so sharply dressed Dedra Meero and her similarly spiffy colleagues are called into an emergency gathering at the Imperial Security Bureau.

“I want every Star Sector and Planetary Emergency Retaliation plan in the building ready for presentation by midnight,” says Major Partagaz (Anton Lesser).

Hope no one had plans.

Mon Mothma addresses a nearly empty Senate — hinting that Emperor Palpatine has been stripping away democratically elected representatives’ powers — but even the few politicians who bothered to show up are distracted by the news alert about the heist (presumably from the Coruscant Times or something).

In the antique shop he uses as his cover, Luthen hears about the attack from a customer and laughs with relief.

Unfortunately, one can expect the Empire to strike back pretty hard next episode.

Aside from the cool heist action, this episode subtly highlights how similar people are in this universe despite their allegiances and backgrounds. After the heist is done, local Dhanis and Imperials alike are awestruck by the Eye of Aldhani’s beauty. Even Cinta, who remained behind as the other rebels escaped, calmly steps out and joins the viewing party.

Much like real life, we all love shiny, pretty stuff.

Unfortunately, also like in real life, people always stomp on others. Lacking respite for the Dhanis, Commandant Beehaz is leading an effort to manipulate them into giving up their traditions and submitting to Imperial rule. Some classic disgusting colonialism there.

Beehaz is driven to this by a pretty basic, relatable human need. He’s willing to facilitate the Empire doing terrible things if it gets his family off this backwater world and into a little more comfort.

And it’s pretty unpleasant to see his wife and son being taken hostage by the rebels — it’s reminiscent of the horrible corporate security force goons bullying Cassian’s mother back on Ferrix. It’s unlikely Beehaz survived his medical incident, but hopefully his family is alright.

Come back for more Easter eggs and observations on Oct. 19, when episode 7 of Andor hits Disney Plus.

Movies Coming in 2022 From Marvel, Netflix, DC and More

Apps and advertisers are coming for your lock screen, and it’s going to be exhausting