HomeSports“Am I still the quitter?"
Sports

“Am I still the quitter?” 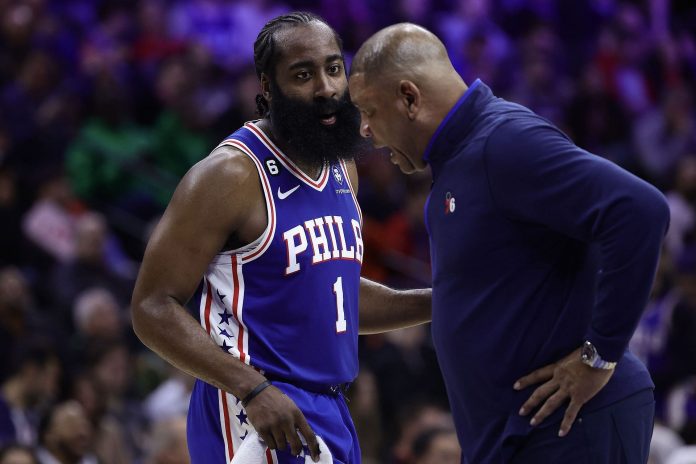 The James Harden experiment ended in Brooklyn without much success. Harden got a lot of heat for wanting to leave a situation that wasn’t working out. While speaking to Fox Sports about the situation, Harden spoke up for himself.

“Am I still the quitter?” Harden said.

Harden wanted to leave Brooklyn after not having the team he wanted to play with on the court. There were injuries and Kyrie Irving not getting the COVID-19 vaccine cost them a lot of games. When Harden discussed wanting to depart, he also mentioned that Kevin Durant wanted to leave the Nets this summer as well.

Harden is now a member of the Philadelphia 76ers and is paired with MVP candidate Joel Embiid. The team fell in the second round of the playoffs last season to Miami in the Eastern Conference semifinals, but the 76ers (15-12) are back with a reinvigorated roster.

“I knew people were going to talk and say, ‘You quit’ and all that stuff, but then the following summer, the other superstar there [Durant] wanted to leave. So it’s like: Am I still the quitter?”

“I knew people were going to talk and say, ‘You quit’ and all that stuff, but then the following summer, the other superstar there [Durant] wanted to leave. So it’s like: Am I still the quitter?”— James Harden(via @YaronWeitzman, foxs.pt/3W382Jb)

Harden returned to the Sixers’ lineup after an injury kept him out for a month, and he has been very good. He is averaging 22.3 points, 12.5 assists and 6.0 rebounds per game for a team that has won three straight games.

The team will face off against the road-challenged, Stephen Curry-less Golden State Warriors (14-15) at home on Friday night.

The Philadelphia 76ers will get their first full season of James Harden and Joel Embiid together. These two players can be the best inside and outside punches in the league. Harden, obtained in the Ben Simmons trade in February, is a former league MVP, and Embiid is a candidate who aspires to win one.

They’re beginning to figure it out. #ScaryMinutes.

In the last two games, Harden has had over 15 assists in both contests, while Embiid scored 31 and 53. Over the last four games, Embiid is averaging 40.3 ppg and 9.5 rpg. During that stretch, they are getting James’ 22.3 ppg and 12.5 apg. If they can keep this up, they will be almost impossible to stop.

The team is in fifth place in the Eastern Conference standings. They will have to move up to at least fourth place to have home-court advantage in a first-round series. The team is only six games out first place in the conference with more than half of the season left.

Could Kevin Durant wind up in Portland?

Marcus Mariota off to incredible start versus 49ers