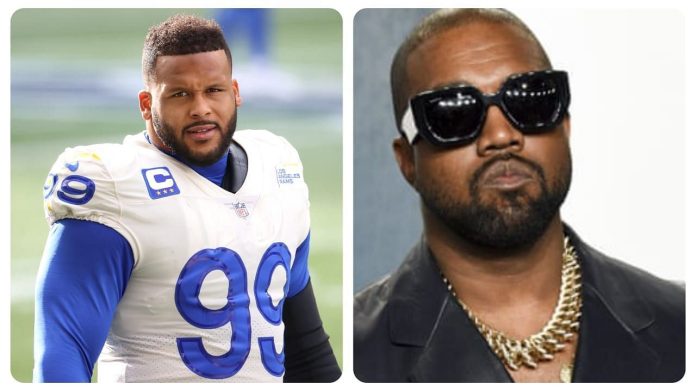 The controversy has been brewing ever since October 9, when West and fellow rapper Diddy engaged in a conversation about the former’s “White Lives Matter” T-shirt controversy.

In an exchange that would soon spiral out of control, the Grammy award winning-rapper tweeted that he would “go death con 3 on Jewish people.” He later tried to defend his statement but the tweet was swiftly deleted and has since been locked out of his account.

Donald joined Donda Sports back in May weeks after winning his first Super Bowl ring with the LA Rams. The agency, founded and named by West after his late mother, now finds itself in deep trouble as Donald isn’t the only major star to back out.

The NBA’s Jaylen Brown, who too, signed a contract with the agency in May. took to Twitter to make it known that he too was disasociating himself from the label following the backlash:

“In light of that, after sharing in conversations, I now recognize that there are times when my voice and my position can’t coexist in spaces that don’t correspond with my stance or my values. And, for that reason, I am terminating my association with Donda Sports.”

Who is the president of Kanye West’s Donda Sports?

As West tries to put out the raging inferno brought upon his business ventures thanks to his comments, he can rest easy knowing that Donda Sports will be in safe hands. After all, the president of the organization is, of course, Antonio Brown.

Back in February, Brown had posted an image of an invoice for over $2.1 million through which he made the world know that he was the man running Donda. Brown has recently been pursuing musical ambitions of his own. But the pullouts of Donald and Brown will definitely have him spending a few more hours working on calls than busting a freestyle in the studio.

What’s next for the U,S, men’s soccer team?

This artist is dominating AI-generated art. And he’s not happy about it.