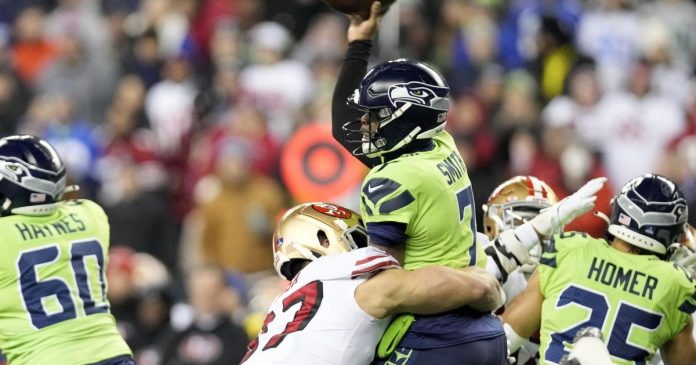 Nick Bosa might be the only person Thursday night who thought he committed a penalty when he was flagged for roughing the passer against the Seahawks.

Early in the second half, with the 49ers already up 21-3, Bosa got pressure on Geno Smith and leveled the Seahawks quarterback, which resulted in Smith making an errant throw that 49ers defensive back Deommodore Lenoir picked off and returned for a touchdown.

The roughing penalty on Bosa wiped out the touchdown and allowed the Seahawks to retain possession.

The call ignited yet another firestorm about the NFL’s controversial “body weight” rule that spawns questionable calls like this one.

What is the NFL’s body weight rule?

The NFL’s body weight rule in relation to roughing the passer is usually the reason these seemingly innocuous hits are called penalties.

A rushing defender is prohibited from committing such intimidating and punishing acts as “stuffing” a passer into the ground or unnecessarily wrestling or driving him down after the passer has thrown the ball … When tackling a passer who is in a defenseless posture (e.g., during or just after throwing a pass), a defensive player must not unnecessarily or violently throw him down and land on top of him with all or most of the defender’s weight. Instead, the defensive player must strive to wrap up the passer with the defensive player’s arms and not land on the passer.

MORE: 49ers playoff picture: How San Francisco can get all the way up to the No. 1 seed

The problem, of course, is that in live game action, it is almost impossible to follow the rule sometimes. Bosa’s hit was made worse by Smith colliding with an engaged lineman on his way down, folding his body awkwardly.

Bosa was diplomatic after the game when he was asked about the hit.

“It was the right call,” he told Amazon’s Kaylee Hartung. “With what they’ve been calling lately. Kind of lost my head there and unfortunately hurt my team.”

Luckily for Bosa — and the 49ers — the game wasn’t closer in the end. San Francisco won 21-13. But if this kind of call is made in a more competitive game, the cries against the rule that produces the call will only get louder.

Has Tom Brady ever had a losing season? Breaking down QB’s record by season with Buccaneers and Patriots