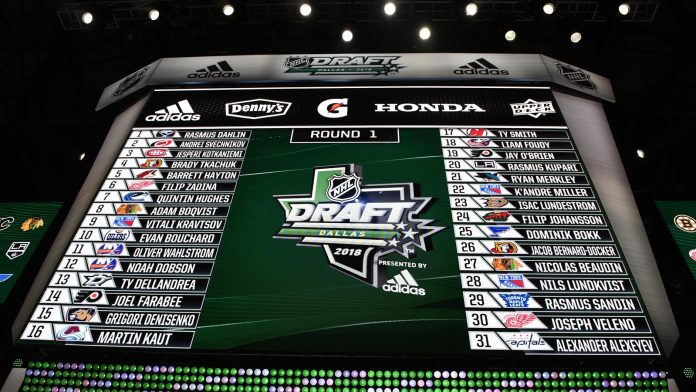 When the United States National Development Program was started in 1996, it was an American prospect fan’s dream.

The idea was to showcase the best talent from around the country in a condensed fashion, putting a showcase on elite players that might not have gotten the same recognition if they were spread out normally. It took a while for things to catch on, with USA not snagging a medal at a major event until they won gold at the 2002 U-18 World Championship, but they’ve been the team to beat on the international stage ever since.

That makes them easily must-watch entertainment every year, even if the talent level fluctuates. This year, there’s no elite talent to speak of – that’s coming next year – but there’s still some immense quality this year. So much so that the program is off to one of the best starts in franchise history, holding a 19-3-0 record heading into the weekend. They mainly play against college and USHL teams, so putting up results like this is highly notable.

The most noticeable player right now is centerman Will Smith. He slapped the competition at the U-18 Five Nations in Plymouth, and leads all U-18 NTDP players with 43 points in 22 games. That’s nothing to sneeze at – an 80-point campaign is looking likely, which would put him in some fairly elite company. He started the season as a mid-first-rounder but has quickly earned praise by scouts as a potential top-five pick.

Smith is a terrific goal scorer, can pull off fake passes better than anyone and is continuing to prove himself as one of the best slot passers in the draft class. Smith handles the puck confidently, has a quick release on his wrist shot and can deke with the best of them. One concern I have, though, is how quiet he can be if his teammates aren’t getting the job done. I’m not saying Smith needs good linemates to produce, but he can float around a bit of times, which knocks him down a bit. However, Smith’s game is packed with skill, and a team needing a reliable center that wins a ton of faceoffs and can generate offense on his own will be thrilled by landing Smith.

Then, there’s Ryan Leonard, another centerman. He’s the team’s leading goal-scorer, playing at just under a goal-per-game pace after the 20-game mark. A high-end sniper, Leonard owns a shot that combines a nice mix of speed and accuracy that allows him to get it off quickly without hesitation. When given room on the power play, he can let his shot absolutely fly, and he can hold his own around the net in physical situations. The younger brother of Nashville Predators prospect John Leonard has pro pedigree written all over him and should be a solid secondary scorer in the NHL.

Oliver Moore is another many expect to go in the first round. Moore’s offensive output is a bit more muted compared to other top prospects, but he’s a quick two-way forward who should be able to slot into an NHL’s team’s middle six. He’s energetic with a quick stride and high-end footwork in tight spaces. Moore wins so many puck battles as a result, and he can play with just about anyone in the lineup with similar results. If the University of Minnesota forward doesn’t end up being a high-end point producer, his value as an energy forward will give him plenty of opportunities.

There are some other notable American forwards, such as Ryan Fine, Will Vote, Alex Weiermair and Danny Nelson. But the last one we’ll touch on here is Gabe Perreault, the son of former NHL center Yanic Perreault. When Gabe is on his game, he can be an unstoppable force at this level. Perreault’s ability to outthink opponents will get him far, even if his game is a bit flawed away from the puck.

On the blueline, it’s a bit of a mixed bag. But the one defender receiving a ton of praise recently is Aram Minnetian. The offensive blueliner had an excellent Five Nations tournament with eight points and is really starting to look comfortable. He spent a lot of time as a forward as a youth, and you can notice that in the way he pinches in and helps drive plays. Minnetian does an excellent job of rushing the puck down the ice and his high offensive IQ allows him to find teammates through his peripheral vision, which can be highly deceptive. Minnetian should have no issue finding a role in the NHL one day once he finishes at Boston College.

It’ll be interesting to see how the team’s two goaltenders stack up going forward. Trey Augustine has a near-perfect record this year and was USA’s starter at the U-18 World Championship as an underager last year. He has lost just once in regulation in 21 games over his career and has all the key goalie attributes nailed down – except size. He’s 6-foot-1, which is still rather small by NHL standards. As long as he can compensate for it, though, he’ll earn draft attention. On the flip side, there’s Carson Musser, who stands tall at 6-foot-4. His numbers aren’t as great as Augustine’s and he isn’t high up on many draft boards. Musser still feels rawer, though, and there could be untapped potential.

It’s still very early, but a safe assumption could see around 12-14 USNTDP players selected this year. Five of them – Smith, Leonard, Moore, Minnetian and Perreault – shouldn’t have to wait too long. They’ll easily be favorites to win gold at the U-18 World Championship in April and will continue to play great hockey this year. It’s not the strongest class we’ve seen, but it’s a solid one, and one with more than a handful of quality future NHLers.

But next year, look out for Cole Eiserman and James Hagens. They’re going to be game-changers.

Blockchain and cybersecurity awareness on the rise — PolySwarm CEO By Cointelegraph