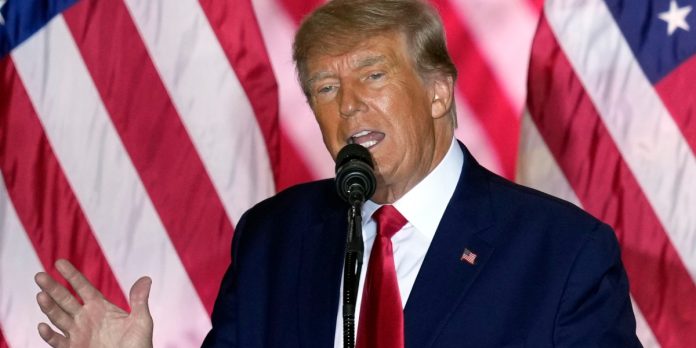 Prosecutors resumed their closing argument Friday in the Trump Organization’s criminal tax fraud trial, promising to share previously unrevealed details about Donald Trump’s knowledge of a tax dodge scheme hatched by one of his top executives.

“Donald Trump knew exactly what was going on with his top executives,” Assistant Manhattan District Attorney Joshua Steinglass told jurors on Thursday during the first half of his closing argument, adding: “We will come back to that later.”

Steinglass spoke for about an hour on Thursday and has told the judge he expects to need a total of at least four hours to summarize the case against the former president’s company.

The Trump Organization, the entity through which Trump manages his real estate holdings and other ventures, is accused of helping executives avoid paying income taxes on company-paid perks such as Manhattan apartments and luxury cars.

Prosecutors argue that the Trump Organization is liable because two executives involved in the scheme — longtime finance chief Allen Weisselberg and controller Jeffrey McConney — were “high managerial” agents entrusted to act on behalf of the company and its various entities.

Trump himself is not on trial. Company lawyers objected to Steinglass’ comment Thursday, but Judge Juan Manuel Merchan overruled them. He said the company’s lawyers opened the door by asserting in their closing arguments that Trump was ignorant of the scheme.

“The fact that this was sanctioned and a practice that was known to Mr. Trump directly rebuts” that claim, Steinglass told Merchan as lawyers further argued the issue Friday morning before jurors entered the courtroom.

“They can’t use this as a sword and a shield,” Steinglass said, responding to the defense’s repeated objections. “They can’t attempt to exonerate someone who isn’t on trial and not allow me a chance to respond.”

Merchan said it was “fair game” for Steinglass to address Trump’s knowledge of the scheme but warned him not to dwell on the topic or suggest that the former president should have been charged along with his company. Steinglass promised to abide by those conditions.

The defense has alleged that Weisselberg came up with the tax dodge scheme on his own without Trump or the Trump family knowing, and that the company didn’t benefit from his actions. Weisselberg testified that Trump didn’t know, but that the Trump Organization did derive some benefit because it didn’t have to pay him as much in actual salary.

“Their entire theory of the case is a fraud,” Steinglass said.

The tax fraud case is the only trial to arise from the three-year investigation of Trump and his business practices by the Manhattan district attorney’s office. The company has denied wrongdoing,

If convicted, the Trump Organization could be fined more than $1 million.

Closing arguments are the last chance for prosecutors and defense lawyers to sway jurors before they deliberate next week.

Our new weekly Impact Report newsletter will examine how ESG news and trends are shaping the roles and responsibilities of today’s executives—and how they can best navigate those challenges. Subscribe here.

The Many Medicinal Benefits of Cannabis and Cannabidiol (CBD)