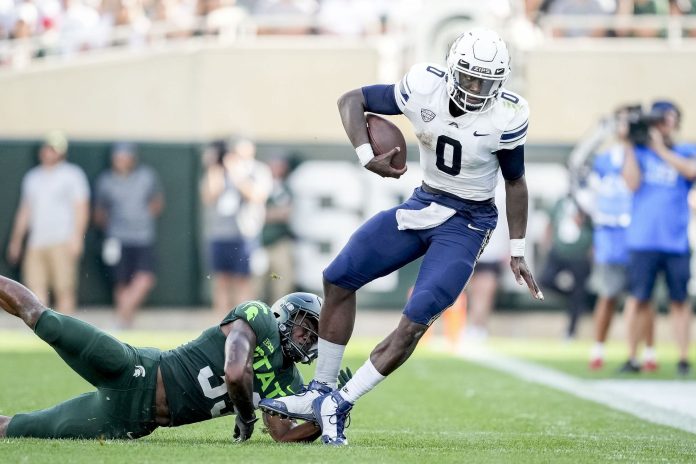 The Akron Zips and the Buffalo Bulls square off in a Mid-American Conference matchup on Friday afternoon to conclude the regular season.

The Zips have struggled offensively, as they have scored 21.7 points on 378.6 total yards per game thus far. Junior quarterback DJ Irons is currently 50th in the country at this level with 2,605 yards while having a 10:7 touchdown-to-interception ratio. They also have an excellent wide receiver, sophomore Alex Adams. He has 56 catches for 837 yards (14.9 yards per reception) and eight receiving touchdowns.

Defensively, they are brutal as they are giving up 34.5 points per game and are allowing teams to run for 174.7 yards per game against them. They have not been able to apply pressure and force turnovers as they have 17 sacks as a team and eight interceptions as well as two fumble recoveries throughout the entire season.

The Buffalo Bulls have not had any problems scoring the ball, averaging 29.5 points on 384.2 total yards per game. A huge factor is their ability to run the football, with senior running back Ron Cook Jr. coming in with 139 carries for 600 yards (4.3 yards per attempt), four rushing touchdowns, and 16 catches for 207 yards (12.9 yards per reception) without a receiving touchdowns. Sophomore quarterback Cole Snyder has been doing well. He has completed 59.9 percent of his passes for 2,501 yards with 14 touchdowns and seven interceptions.

Their defense has struggled, giving up 27.6 points per game this season and allowing 212.7 passing yards allowed per game thus far. They have 10 interceptions and 11 fumble recoveries, as well as 19 sacks this year.

These teams are not doing too well offensively where they can be expecting a lot of points to be scored. Akron is a one-dimensional offense, which means they will be punting the football a lot to begin the game. Buffalo is a decent offense, but they are going to take a while to get some drives going. Take the under here.

The Akron team is not very good and should not be able to keep the game close. The game was rescheduled after a snowstorm hit Buffalo before Thanksgiving, but the Bulls will be able to dominate on an early Friday game. The Zips are listing DJ Irons as questionable and that should be a big cause for concern for an already shaky offense. Buffalo can apply a lot of pressure defensively and should be able to hold Akron to around 10-13 points here.

The Bulls have covered in each of their last four games against the Zips. Go with that to happen once again.